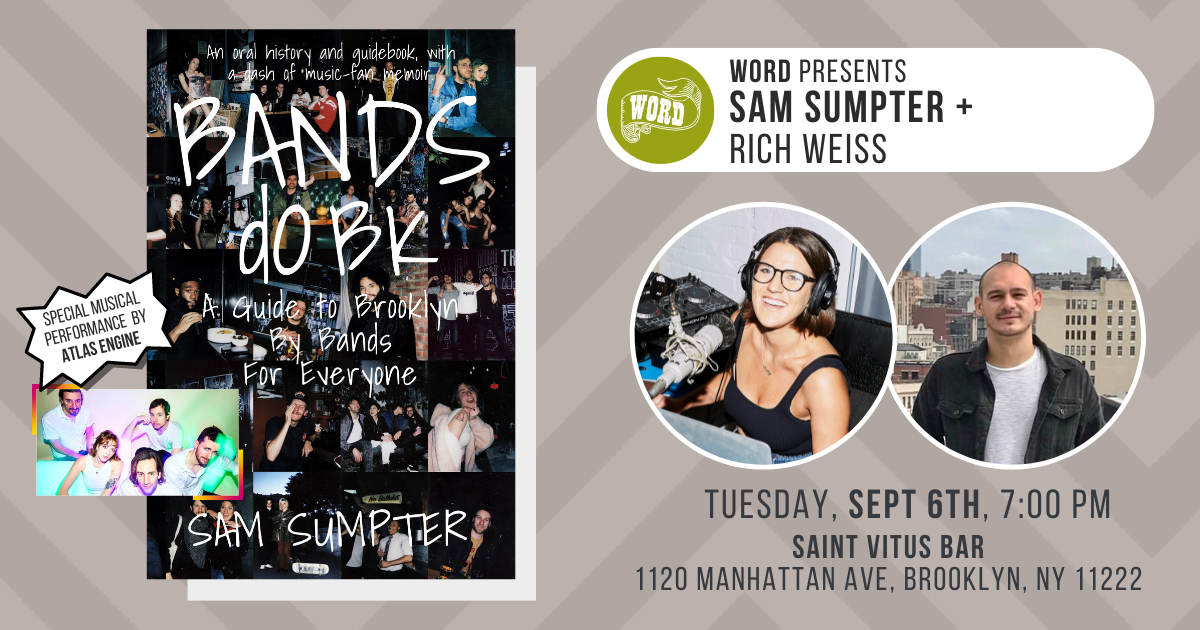 In Bands do BK, Sam Sumpter explores Brooklyn from the unique perspective of the bands who live it and love it. Equal parts oral history, guidebook, and music-fan memoir, Sumpter shares behind-the-scenes stories, sound bites, and recommendations on places to visit from hundreds of featured interviewed bands—a hot slice of New York City indie chronicling the people and places that define it.

Based on Sumpter’s popular music blog, Bands do BK supports local Brooklyn musicians while sharing new ways to explore and enjoy the borough. In Bands do BK, you’ll discover stories you don’t read on an about page or social-media bio, details and recommendations that aren’t incorporated into reviews, and the defining characteristics that definitely don’t factor into typical guidebook ratings.

Meet your new favorite band, discover your next go-to bar, expand your personal playlist, and experience the weird, wonderful, and unbeatable beauty of Brooklyn’s influential music scene for yourself.

Books will be available for purchase onsite

Sam Sumpter is the founder and editorial director of Bands do BK. She is a journalist, MC, and host of the popular radio show, Bands do BK on Radio Free Brooklyn, featuring live interviews with local artists. She is the manager of the punk band Mary Shelley, and produces, books, and promotes live shows on stages across Brooklyn and in Manhattan. Since founding Bands do BK, Sumpter has spent time in recording studios, music venues, performance spaces, restaurants, bars, and cafes in the borough of Brooklyn interviewing her favorite musicians about their favorite places while using Bands do BK as a platform to share and promote the amazing music of the artists she loves.

Rich Weiss is the founder of Bloodless Management, a consulting agency focused on artist development, as well as its event-production subsidiary, Bloodless Presents. In addition, he is the Senior Talent Buyer at Arlene’s Grocery, where he is active in curating exciting lineups that showcase the most innovative rising talent in Brooklyn, Manhattan, and beyond.

Atlas Engine is an indie/dream rock band formed by multi-instrumentalist Nick LaFalce. After 5 years in Brooklyn playing in equally as many bands, LaFalce decided to self-record and produce what would become his first solo EP After the End in 2016. The EP quickly gained features on Spotify's Fresh Finds and Pandora's Today's Indie playlists, terrestrial radio, and praise from The Wild Honey Pie, New Noise Magazine,& The Deli's Emerging Artists list. Since then, the band has expanded five-fold to include Katie Glasgow (keys/vocals), Garrett Hess (guitar/keys), Patrick Cochrane (bass/vocals), and Brendan McGuckin (drums) and has been building its presence in the greater Brooklyn area. In 2019, LaFalce toured the midwest and London supporting the band’s latest single “Secrets”. Plans for 2022 include more new music as well as the band’s first appearance at the Treefort festival in March.

Bands do BK: A Guide to Brooklyn, by Bands, for Everyone (Paperback)