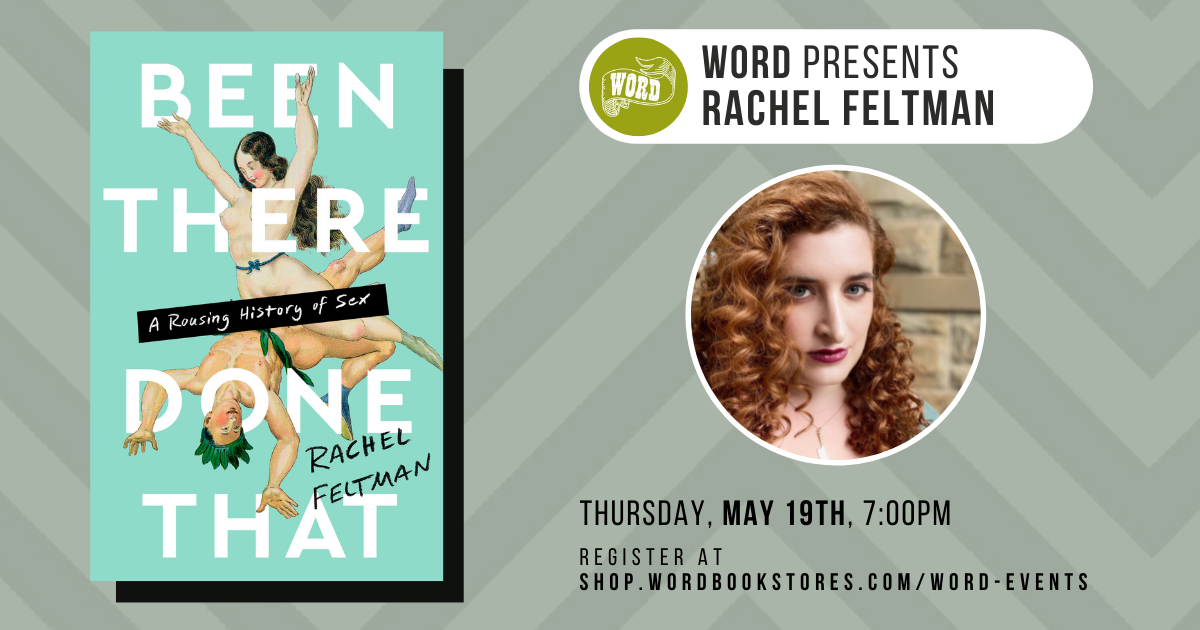 From historical attempts at birth control to Hildegard von Bingen's treatise on the female orgasm, Been There, Done That by Rachel Feltman is a rollicking, myth-busting romp that demystifies plenty of urban legends along the way.

Join us at WORD Jersey City, Thursday May 19 at 7PM

Roman physicians told female patients they should sneeze out as much semen as possible after intercourse to avoid pregnancy. Historical treatments for erectile dysfunction included goat testicle transplants. Sex has changed in a million ways since Adam and Eve, the original awkward virgins, and in a million others it hasn’t. With unstoppable curiosity and mischievous humor, science writer Rachel Feltman debunks myths, breaks down stigma, and uses the long, outlandish history of sex to dissect present-day practices, attitudes, and taboos.

Feltman knows that cracking jokes is an effective way to dismantle fear and help people gain scientific literacy, and indeed, as it gravitates toward the strange, Been There, Done That delivers some meaningful and sorely needed sex-ed. Explorations into age-old questions and bizarre trivia around birth control, aphrodisiacs, STIs, courtship rituals, and more show that, when it comes to carnal pleasures and procreation, there’s never been a normal and that sex isn’t something to be scared of.

Rachel Feltman’s first paying gig was organizing a bookshelf full of textbooks on vulvar disease at the age of seven, and she never looked back. She’s the Executive Editor of Popular Science and hosts PopSci’s podcast The Weirdest Thing I Learned This Week. In 2014, Feltman founded the Washington Post’s Speaking of Science blog, known for headlines like “You probably have herpes, but that’s really okay,” and “Uranus might be full of surprises.” Feltman studied environmental science at Simon’s Rock and has a master’s in science reporting from NYU. She’s a musician, an actress, and the stepmom of a very spry 14-year-old cat.

Conversation partner to be announced

Been There, Done That: A Rousing History of Sex (Hardcover)

A rollicking, myth-busting history of sex that moves from historical attempts at birth control to Hildegard von Bingen’s treatise on the female orgasm, demystifying plenty of urban legends along the way.

Roman physicians told female patients they should sneeze out as much semen as possible after intercourse to avoid pregnancy.

RSVP below for WORD Presents Rachel Feltman, author of BEEN THERE, DONE THAT  May 19, 2022 at 7PM