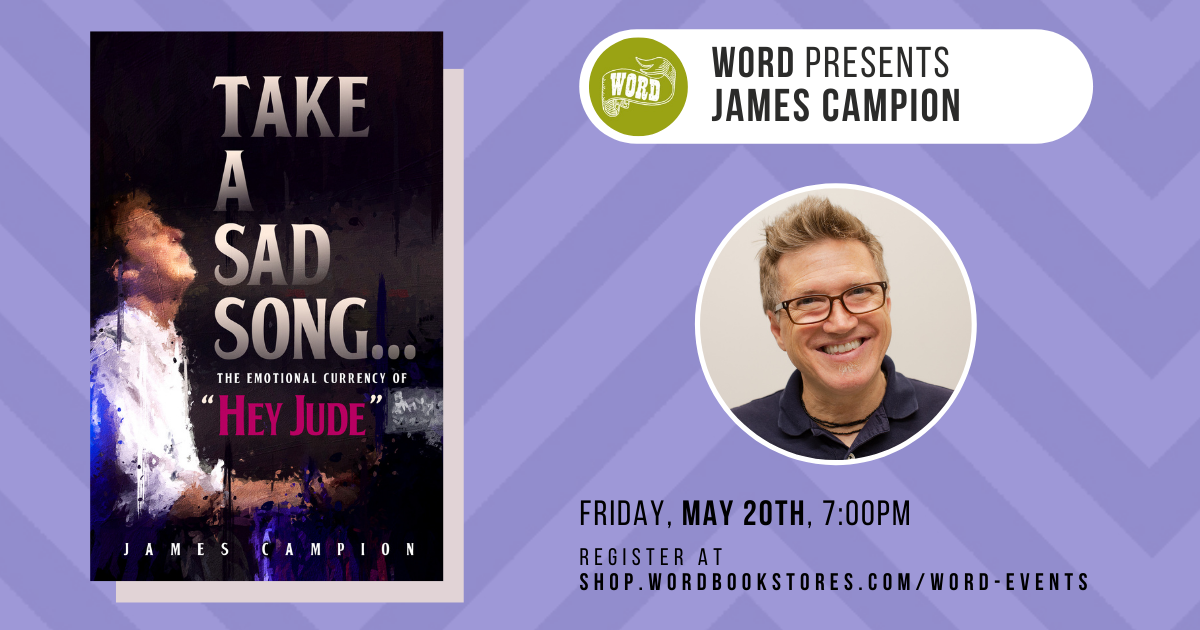 Take a Sad Song is a tribute to how a song can define, inspire, and affect us in ways we do not always fully comprehend, as well as a celebration of a truly amazing track in the Beatles canon that reveals one band’s genius and underscores its lasting voice in our cultural and musical landscape.

Join us at WORD Jersey City, Friday May 20 at 7PM

In Take a Sad Song: The Emotional Currency of “Hey Jude,” James Campion dives deeply into the song’s origins, recording, visual presentation, impact, and eventual influence, while also discovering what makes “Hey Jude” a classic musical expression of personal comfort and societal unity conceived by a master songwriter, Paul McCartney. Within its melodic brilliance and lyrical touchstones of empathy and nostalgia resides McCartney’s personal and professional relationship with his childhood friend and songwriting partner, John Lennon, and their simultaneous pursuit of the women who would complete them. There are also clues to the growing turmoil within the Beatles and their splintering generation scarred by war, assassination, and virulent protest.

Campion’s journey into the song includes the insights of experts in the fields of musicology, sociology, philosophy, psychology, and history. Campion also reveals commentary from noted Beatles authors, biographers, music historians, and journalists and, finally, a peek into the craft of songwriting from a host of talented composers across several generations.

James Campion is a syndicated columnist and contributing editor for the pop culture magazine the Aquarian Weekly, where he's reported on and interviewed several and varied musical artists and reviewed concerts and albums for twenty-three years. His long-form music essays are featured in the webzine Dog Door Cultural. His work has also appeared in NY Newsday, North County News, Hackwriters, and Huff Post, among other periodicals. He is also the co-host of the popular music podcast Underwater Sunshine with Counting Crows front man, Adam Duritz. The two host an annual music festival in New York City by the same name.

Robert Tatis is the manager of Creative Media Services at Sharp Electronics. He has worked with James Campion designing the book covers of y and Deep Tank Jersey - 20th Anniversary Edition as well as designing his media images for his various YouTube channels and podcasts.

RSVP below for WORD Presents James Campion, author of TAKE A SAD SONG on Friday, May 20, 2022 at 7PM