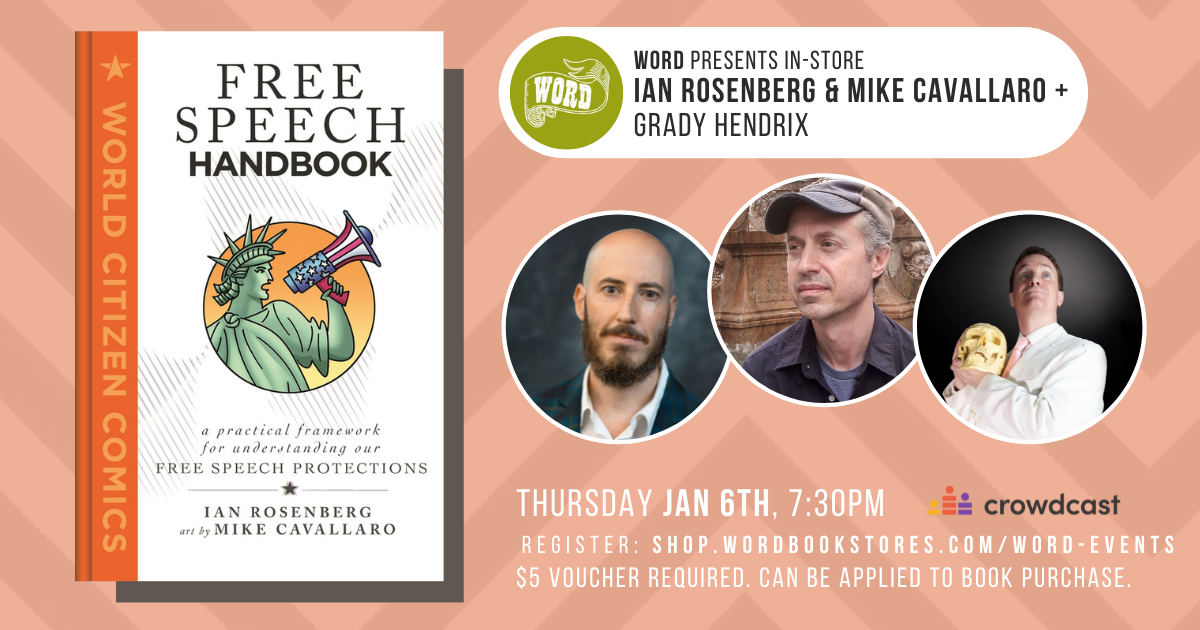 ** IN CONCERN FOR THE HEALTH AND SAFETY OF OUR CUSTOMERS, THIS EVENT WILL NOW BE VIRTUAL ON CROWDCAST.

In Free Speech Handbook, a new nonfiction graphic novel from First Second’s World Citizen Comics series, media lawyer Ian Rosenberg and artist Mike Cavallaro create a practical framework for understanding where our free speech protections have come from and how they may develop in the future.

Freedom of speech is perhaps the most American of virtues. In a nation where everyone wants to speak and be heard, this First Amendment right is vital to our identity and our democracy. These rights have been advanced by people who spoke out and fought in our nation’s highest court, with each decision refining and reshaping what exactly “free speech” means. In Free Speech Handbook, Ian Rosenberg and Mike Cavallaro brilliantly trace this turbulent history across ten seminal Supreme Court cases while drawing parallels with more recent controversies. Rosenberg’s straightforward language combines with Cavallaro’s bold and bright art to create an accessible and engaging crash course on the meaning, reach, and limits of our free speech rights.

Each chapter in Free Speech Handbook focuses on a contemporary free speech question—from student walkouts for gun safety to Colin Kaepernick’s “Take a Knee” protests, from Nazis marching in Charlottesville to social media trolls— and then tells the story of the people behind the key Supreme Court case that provides the answers. Together these fascinating stories create a practical framework for understanding where our free speech protections originated and how they can evolve in the future. Free Speech Handbook is a tool for fighting authoritarianism, protecting our democracy, and bringing an appreciation of free speech law to people of all ages.

Mike Cavallaro is from New Jersey and has worked in comics and animation since the early 1990s. His comics include Eisner Award–nominated Parade (with fireworks), The Life and Times of Savior 28 (written by J.M. DeMatteis), Foiled and Curses! Foiled Again (written by Jane Yolen), Decelerate Blue (written by Adam Rapp), and the Nico Bravo series (a 2019 New York Public Library Best Books for Kids selection).

Grady Hendrix is the New York Times-bestselling author of The Final Girl Support Group, The Southern Book Club's Guide to Slaying Vampires, My Best Friend's Exorcism, and more. He's the co-author of Dirt Candy: A Cookbook, the first graphic novel cookbook, alongside chef Amanda Cohen and artist Ryan Dunlavey, with whom he also wrote the comic strip Li'l Women. His history of the horror paperback boom of the '70s and '80s, Paperbacks from Hell, won the Stoker Award for Outstanding Achievement in Nonfiction. You can learn more useless facts about him at www.gradyhendrix.com

In this volume of the World Citizen Comics series, Ian Rosenberg and Mike Cavallaro create a practical framework for understanding and appreciating the First Amendment.