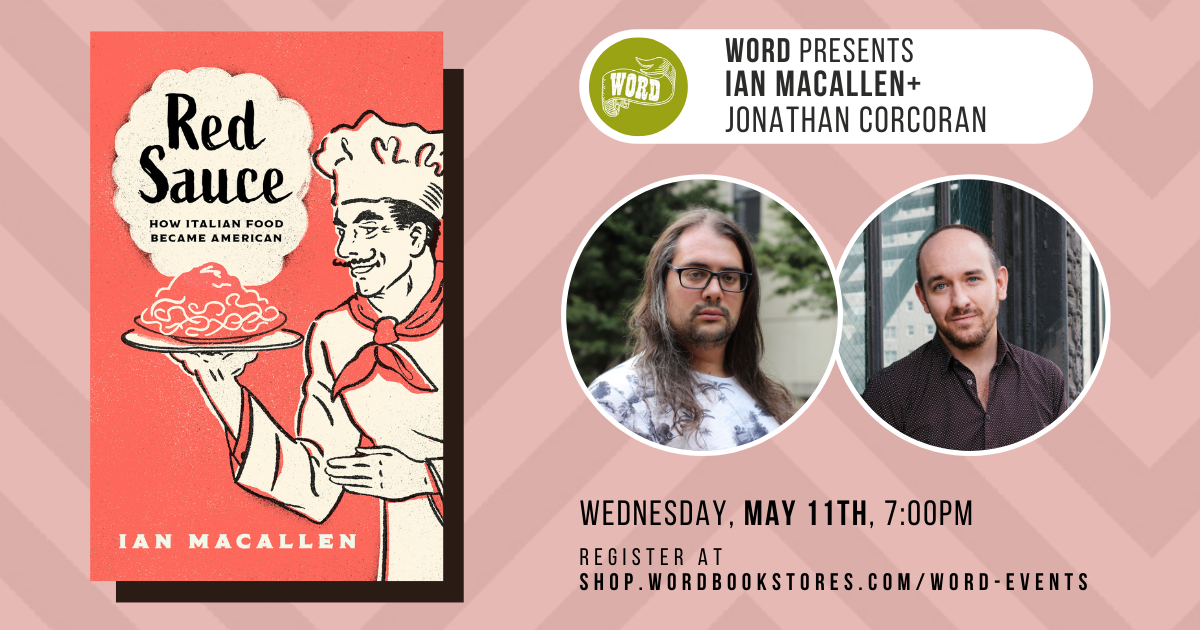 In Red Sauce, Ian MacAllen traces the evolution of traditional Italian-American cuisine, often referred to as “red sauce Italian,” from its origins in Italy to its transformation in America into a new, distinct cuisine.

Join us at WORD Jersey City, Wednesday May 11 at 7PM

It is a fascinating social and culinary history exploring the integration of red sauce food into mainstream America alongside the blending of Italian immigrant otherness into a national American identity. The story follows the small parlor restaurants immigrants launched from their homes to large, popular destinations, and eventually to commodified fast food and casual dining restaurants. Some dishes like fettuccine Alfredo and spaghetti alla Caruso owe their success to celebrities, and Italian-American cuisine generally has benefited from a rich history in popular culture.

Drawing on inspiration from Southern Italian cuisine, early Italian immigrants to America developed new recipes and modified old ones. Ethnic Italians invented dishes like lobster fra Diavolo, spaghetti and meatballs, and veal parmigiana, and popularized foods like pizza and baked lasagna that had once been seen as overly foreign. Eventually, the classic red-checkered-table-cloth Italian restaurant would be replaced by a new idea of what it means for food to be Italian, even as ‘red sauce’ became entrenched in American culture.

Ian MacAllen is the author of Red Sauce: How Italian Food Became American. He is a writer, editor, and graphic designer living in Brooklyn.

Jonathan Corcoran is the author of the story collection, The Rope Swing, published in 2016 by West Virginia University Press. The Rope Swing was a finalist for the 2017 Lambda Literary Awards and long-listed for The Story Prize. His stories have been anthologized in Eyes Glowing at the Edge of the Woods: Fiction and Poetry from West Virginia and Best Gay Stories 2017. He received a BA in Literary Arts from Brown University and an MFA in Fiction Writing from Rutgers University-Newark. Jonathan is currently Visiting Assistant Professor at Wesleyan University and serves as a Visiting Writer in the low-residency MFA program at West Virginia Wesleyan College. He was born and raised in a small town in West Virginia and currently resides in Brooklyn, NY.

Tells the story of Italian food arriving in the United States and how your favorite red sauce recipes evolved into American staples. In Red Sauce, Ian MacAllen traces the evolution of traditional Italian-American cuisine, often referred to as "red sauce Italian," from its origins in Italy to its transformation in America into a new, distinct cuisine.

RSVP below for WORD Presents Ian MacAllen author of RED SAUCE, in conversation with Jonathan Corcoran, May 11, 2022 at 7PM