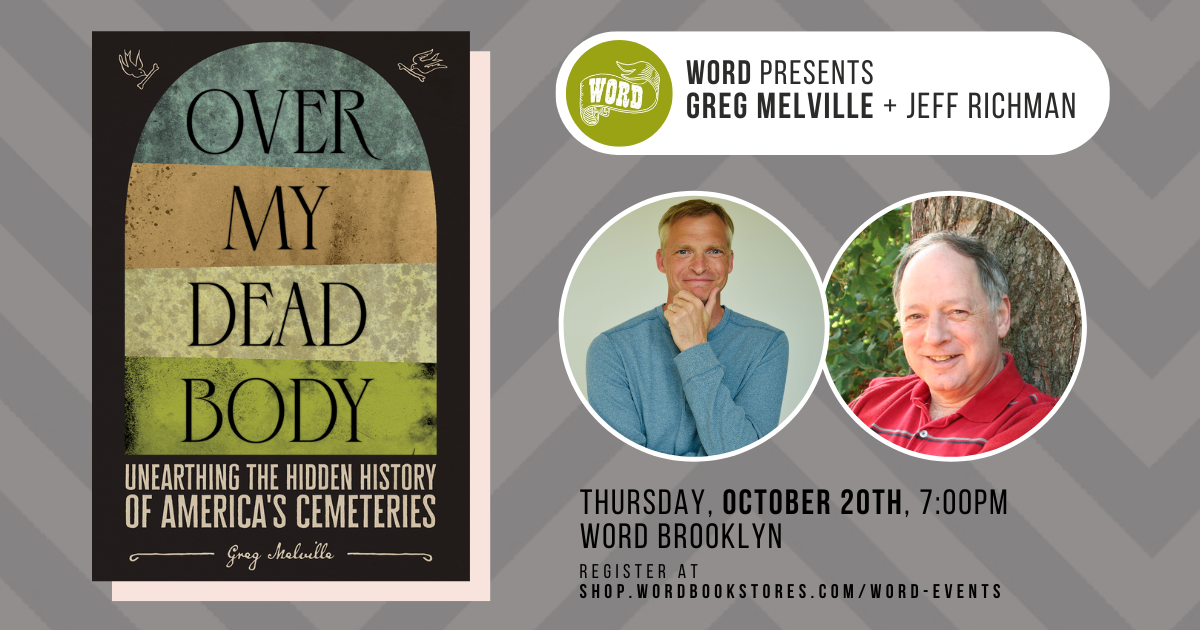 The summer before his senior year in college, Greg Melville worked at the cemetery in his hometown. Thanks to hour upon hour of pushing a mower over the grassy acres, he came to realize what a rich story the cemetery told of his town and its history. Thus was born Melville’s lifelong curiosity with how, where, and why we bury and commemorate our dead.

Melville’s Over My Dead Body: Unearthing the Hidden History of America’s Cemeteries (Abrams Press; October 4, 2022) is a lively (pun intended) and wide-ranging history of cemeteries, places that have mirrored the past eras of history but have also shaped them. The book explores how cemeteries have given birth to landscape architecture and famous parks, as well as influenced architectural styles; how they’ve inspired and motivated
some of our greatest poets and authors—Emerson, Whitman, Dickinson; and how they’ve been used as political tools to shift the country’s discourse and as important symbols of the United States’ ambition and reach.

But cemeteries are also changing and fading. Embalming and burial are incredibly toxic, and while cremations have just recently surpassed burials in popularity, they’re not great for the environment either. Over My Dead Body explores this and more—history, sustainability, land use, art, politics—and what it really means to memorialize. This fascinating tour of America, its history, and our sustaining fascination with the afterlife, is a perfect read for fans of Mary Roach, Caitlyn Doughty, and Lindsey Fitzharris.

Greg Melville is an adventure writer and former editor at Men’s Journal and Hearst Magazines. His work has appeared in many national publications, including Outside, National Geographic Traveler, Men’s Health, and The Boston Globe Magazine and has been listed in The Best American Sports Writing 2017. He is a decorated navy veteran who served in Afghanistan and teaches writing and literature at the United States Naval Academy, where he was the recipient of the school’s award for excellence in teaching in 2019. He lives with his wife and two kids in Delaware.

Book will be available for purchase at event!

Over My Dead Body: Unearthing the Hidden History of America’s Cemeteries (Hardcover)

RSVP below for WORD Presents Greg Melville, October 20, 2022 at 7PM