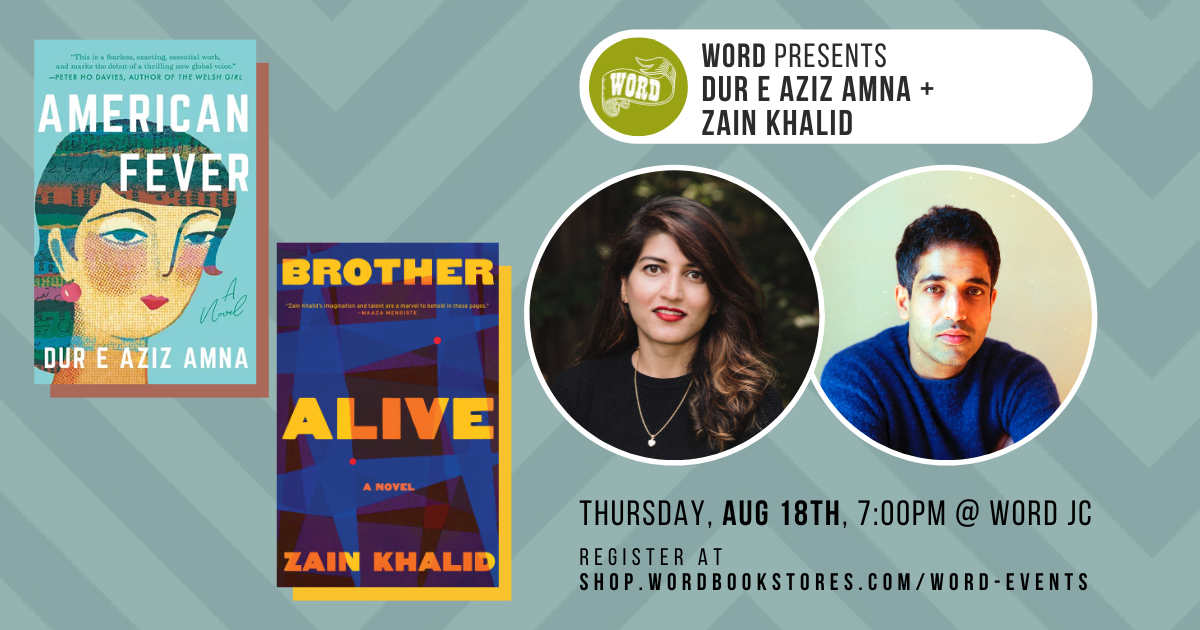 On a year-long exchange program in rural Oregon, a Pakistani student, sixteen-year-old Hira, must swap Kashmiri chai for volleyball practice and try to understand why everyone around her seems to dislike Obama.  A skeptically witty narrator, Hira finds herself stuck between worlds. The experience is memorable for reasons both good and bad; a first kiss, new friends, racism, Islamophobia, homesickness. Along the way Hira starts to feel increasingly unwell until she begins coughing up blood, and receives a diagnosis of tuberculosis, pushing her into quarantine and turning her newly established home away from home upside down.

American Fever is a compelling and laugh-out-loud funny novel about adolescence, family, otherness, religion, the push-and-pull of home. It marks the entrance on the international literary scene of the brilliant fresh voice of Dur e Aziz Amna.

In 1990, three boys are born, unrelated but intertwined by circumstance: Dayo, Iseul, and Youssef. They are adopted as infants and share a bedroom perched atop a mosque in one of Staten Island’s most diverse and underserved neighborhoods. The three boys are an inseparable trio, but conspicuous: Dayo is of Nigerian origin, Iseul is Korean, and Youssef indeterminately Middle Eastern. Youssef shares everything with his brothers, except for one secret: he sees a hallucinatory double, an imaginary friend who seems absolutely real, a shapeshifting familiar he calls Brother. Brother persists as a companion into Youssef’s adult life, supporting him but also stealing his memories and shaking his grip on the world.

The boys’ adoptive father, Imam Salim, is known in the community for his stirring and radical sermons, but at home he often keeps himself to himself, spending his evenings in his study with whiskey-laced coffee, reading poetry or writing letters to his former compatriots back in Saudi Arabia. Like Youssef, he too has secrets, including the cause of his failing health and the truth about what happened to the boys’ parents. When, years later, Imam Salim’s path takes him back to Saudi Arabia, the boys, now adults, will be forced to follow. There they will be captivated by an opulent, almost futuristic world, a linear city that seems to offer a more sustainable modernity than that of the West. But this conversion has come at a great cost, and Youssef and Brother too will have to decide if they should change to survive, or try to mount a defense of their deeply-held beliefs.

Stylistically brilliant, intellectually acute, and deft in its treatment of complex themes, Brother Alive is a remarkable debut by a hugely talented writer that questions the nature of belief and explores the possibility of reunion for those who are broken.

Dur e Aziz Amna is from Rawalpindi, Pakistan. Her work has appeared in the New York Times, Aljazeera, and Dawn, among others. She was selected as Forbes 30 Under 30 in 2022, and won the 2019 Financial Times / Bodley Head Essay Prize. She is a graduate of Yale College and the Helen Zell Writers' Program at the University of Michigan. AMERICAN FEVER is her debut novel.

Zain Khalid’s writing has appeared in The New Yorker, n+1, The Believer, The Los Angeles Review of Books, McSweeney's Quarterly Concern, and elsewhere. He has also written for television. His first novel, BROTHER ALIVE, was published by Grove Atlantic in July 2022.

** "a funny and affecting novel, understated but powerful, a wonderful new spin on the coming-of-age story.”—KIRKUS REVIEWS (STARRED)**

“This is a fearless, exacting, essential work, and marks the debut of a thrilling new global voice.”—Peter Ho Davies, author of The Welsh Girl

On a year-long exchange program in rural Oregon, a

From a New York Times Writer to Watch This Summer, an astonishing debut novel about family, sexuality, and capitalist systems of control, following three adopted brothers who live above a mosque in Staten Island with their imam fatherIn 1990, three boys are born, unrelated but intertwined by circumstance: Dayo, Iseul, and Youssef.

We will be requiring masks to attend this event.