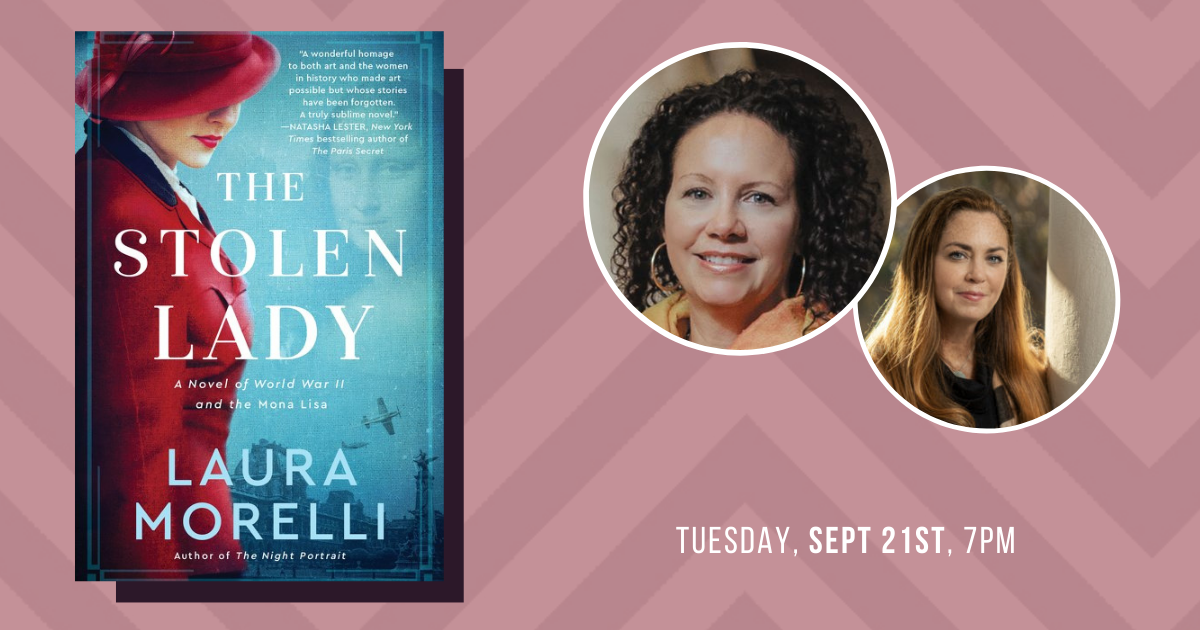 We are delighted to co-sponsor a virtual event in honor of the release of THE STOLEN LADY by Laura Morelli. Laura will be in conversation with Marie Benedict, New York Times bestselling author of THE MYSTERY OF MRS. CHRISTIE.

Purchase a signed copy of THE STOLEN LADY for admission to the virtual event, which will be hosted by William Morrow at 7 p.m. ET. The link to join the event will be sent via email prior to the event. Purchase your book below.

At the dawn of World War II, Anne Guichard, a young archivist employed at the Louvre, arrives home to find her brother missing. While she works to discover his whereabouts, refugees begin flooding into Paris and German artillery fire rattles the city. Once they reach the city, the Nazis will stop at nothing to get their hands on the Louvre’s art collection. Anne is quickly sent to the Castle of Chambord, where the Louvre’s most precious artworks—including the Mona Lisa—are being transferred to ensure their safety. With the Germans hard on their heels, Anne frantically moves the Mona Lisa and other treasures again and again in an elaborate game of hide and seek. As the threat to the masterpieces and her life grows closer, Anne also begins to learn the truth about her brother and the role he plays in this dangerous game.

House servant Bellina Sardi’s future seems fixed when she accompanies her newly married mistress, Lisa Gherardini, to her home across the Arno. Lisa’s husband, a prosperous silk merchant, is aligned with the powerful Medici, his home filled with luxuries and treasures. But soon, Bellina finds herself bewitched by a charismatic monk who has urged Florentines to rise up against the Medici and to empty their homes of the riches and jewels her new employer prizes. When Master Leonardo da Vinci is commissioned to paint a portrait of Lisa, Bellina finds herself tasked with hiding an impossible secret.

When art and war collide, Leonardo da Vinci, his beautiful subject Lisa, and the portrait find themselves in the crosshairs of history.

Laura Morelli holds a Ph.D. in art history from Yale University and has taught at the college level in the U.S. and in Italy. She is a TedEd educator and a columnist for National Geographic Traveler and Italy Magazine. Her debut novel, The Gondola Maker, garnered IPPY and Benjamin Franklin awards.

Marie Benedict is a lawyer with more than ten years' experience as a litigator at two of the country's premier law firms, who found her calling unearthing the hidden historical stories of women. Her mission is to excavate from the past the most important, complex and fascinating women of history and bring them into the light of present-day where we can finally perceive the breadth of their contributions as well as the insights they bring to modern day issues. Her novels include the New York Times bestsellers The Only Woman in the Room, The Mystery of Mrs. Christie, and the Good Morning America Book Club pick The Personal Librarian, co-written with Victoria Christopher Murray. Her forthcoming novel Her Hidden Genius will be published in January 2022.

The Stolen Lady: A Novel of World War II and the Mona Lisa (Paperback)

The Mystery of Mrs. Christie: A Novel (Paperback)

"A stunning story... The ending is ingenious, and it's possible that Benedict has brought to life the most plausible explanation for why Christie disappeared for 11 days in 1926."—The Washington Post