A Better Class of People (Paperback) 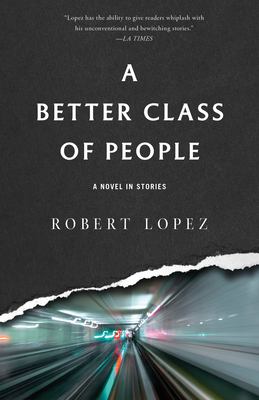 A brilliant novel-in-stories from award-winning author Robert Lopez
In an uncanny, distorted version of New York City, a man rides the subway through the chaos of an ordinary commute. He may have a gun in his pocket. He may be looking for someone--a woman named Esperanza.

Between stops, we shuttle back and forth through time and see a man who stands in traffic, the same man seizing and shuddering on a sidewalk, an institution where the man is housed with other undesirables (or troublemakers?), a neighborhood where all the residents have forgotten their names. Over everything looms the specter of a nameless menace, a pervasive sense that something--more than just a ride--is coming to an end.

With Robert Lopez's signature innovation, A Better Class of People delivers a network of stories interconnected and careening like subway tunnels through the realities of modern America: immigration, gun violence, police brutality, sexual harassment, climate change, and the point of fracture at which we find ourselves, where reality and perception are indistinguishable.