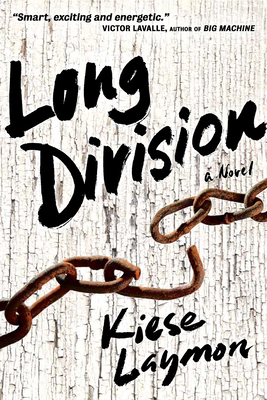 By Kiese Laymon
This item is currently unavailable and can not be ordered.
Out of Print

Kiese Laymon's debut novel is a Twain-esque exploration of celebrity, authorship, violence, religion, and coming of age in Post-Katrina Mississippi, written in a voice that's alternately funny, lacerating, and wise. The book contains two interwoven stories. In the first, it's 2013: after an on-stage meltdown during a nationally televised quiz contest, 14-year-old Citoyen "City" Coldson becomes an overnight YouTube celebrity. The next day, he's sent to stay with his grandmother in the small coastal community of Melahatchie, where a young girl named Baize Shephard has recently disappeared. Before leaving, City is given a strange book without an author called "Long Division." He learns that one of the book's main characters is also named City Coldson--but "Long Division" is set in 1985. This 1985 City, along with his friend and love-object, Shalaya Crump, discovers a way to travel into the future, and steals a laptop and cellphone from an orphaned teenage rapper called...Baize Shephard. They ultimately take these with them all the way back to 1964, to help another time-traveler they meet protect his family from the Klan. City's two stories ultimately converge in the mysterious work shed behind his grandmother's, where he discovers the key to Baize's disappearance.

Kiese Laymon is a black southern writer, born and raised in Jackson, Mississippi. He graduated from Oberlin College in 1998 and earned an MFA from Indiana University in 2003. Laymon is a contributing editor at Gawker.com and has written for numerous publications including Esquire, NPR.org, and ESPN.com. He is an associate professor at Vassar College.

PRAISE FOR KIESE LAYMON AND HIS DEBUT NOVEL, LONG DIVISION:

"Funny, astute and searching.... The author's satirical instincts are excellent. He is also intimately attuned to the confusion of young black Americans who live under the shadow of a history that they only gropingly understand and must try to fill in for themselves." Sam Sacks, Wall Street Journal

"A novel within a novelhilarious, moving and occasionally dizzying.... Laymon cleverly interweaves his narrative threads and connects characters in surprising and seemingly impossible ways. Laymon moves us dazzlingly (and sometimes bewilderingly) from 1964 to 1985 to 2013 and incorporates themes of prejudice, confusion and love rooted in an emphatically post-Katrina world." Kirkus Reviews

"Laymon’s debut novel is an ambitious mix of contemporary southern gothic with Murakamiesque magical realism.... the book elegantly showcases Laymon’s command of voice and storytelling skill in a tale that is at once dreamlike and concrete, personal and political." Booklist

Smart, exciting and energetic...the language romps and roars along through some truly wonderful comic scenes and yet the book doesn’t hesitate to comment seriously on questions that matter to human beings everywhere, not just in rural Mississippi.” Victor LaValle, author of Big Machine and Slapboxing with Jesus

"[One of] our best books of the year so far...Layman’s debut novel is bursting with colloquial language from three generations of Mississippi African Americans, mixed with gut-piercing truths about a long racial divide that persists to this day." —Diane Colson, School Library Journal

Laymon is a brilliant young writer...this is a book that sings in the heart but challenges readers to take careful consideration of the power of memory. Like the best of Hurston, Ellison, or Bambara, Laymon’s craft flows on frequencies that both honor and extend the traditions those writers established.” William Henry Lewis, author of I Got Somebody in Staunton

"A little fantasy, a little mystery and a lot hilarious." Atlanta Journal-Constitution

"Smart and funny and sharp...I loved it." Jesmyn Ward, author of Where the Line Bleeds and Salvage the Bones, winner of 2011 National Book Award for Fiction

"Long Division is one of those books that I picked up and just couldn’t stop reading...powerful, a classic American novel." Jeff Chang, author of Can't Stop Won't Stop: A History of the Hip-Hop Generation and Total Chaos: The Art and Aesthetics of Hip-Hop

"Kiese Laymon is an amazing, courageous and brave novelist and essayist.... Laymon fiercely tackles issues of prejudice, adolescence and love with a swagger and confidence all his own. You rarely find novels this honest and engaging. Read this book." Michigan Quarterly Review

"Laymon’s voice is unique, a rarity in an era during which fiction tends all too often to chase trends.... At times touching, at times poignant, Laymon more than once strikes a beautiful chord in the midst of what often feels gritty and intentionally provocative. Those touching insights make Long Division worth the effort, and readers who stick with the story (stories, actually) will find themselves thinking about City and the people in his life long after they close the book." Chicago Book Review

The racial/ethical awareness is as complex as Coetzee’s, and Laymon is just as good a writer. Laymon takes some real risks. I love the interplay of spirituality and sexuality. Nothing sounds forced, pandering or trendy. City, the husky citizen of the imagination, feels totally singular and totally representative. That’s tough to pull off.” Tim Strode, author of Ethics of Exile