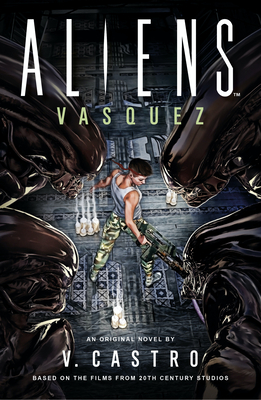 A groundbreaking Latinx Aliens novel by a rising star Latina author, featuring the fan-favorite character PFC Jenette Vasquez from the hit movie Aliens and the family she is forced to leave behind.

For the very first time, the canonical background of the breakout Aliens hero Jenette Vasquez, as well as the story of the children she was forced to leave behind as written by the rising Latina horror star V. Castro (Queen of the Cicadas).

Even before the doomed mission to Hadley’s Hope on LV-426, Jenette Vasquez had to fight to survive. Born to an immigrant family with a long military tradition, she looked up to the stars, but life pulled her back down to Earth—first into a street gang, then prison. The Colonial Marines proved to be Vasquez’s way out—a way that forced her to give up her twin children. Raised by Jenette’s sister, those children, Leticia and Ramon, had to discover their own ways to survive. Leticia by following her mother’s path into the military, Ramon into the corporate hierarchy of Weyland-Yutani. Their paths would converge on an unnamed planet which some see as a potential utopia, while others would use it for highly secretive research. Regardless of whatever humans might have planned for it, however, Xenomorphs will turn it into a living hell.

V. Castro is Mexican American writer from San Antonio, Texas now residing in the UK. As a full-time mother she dedicates her time to her family and writing Latinx narratives in horror, speculative fiction, and science fiction. Her most recent releases include The Queen of the Cicadas from Flame Tree Press and Goddess of Filth from Creature Publishing. Connect with Violet via Instagram and Twitter @vlatinalondon or www.vvcastro.com.

Praise for V. Castro and The Queen of the Cicadas:

“In The Queen of the Cicadas, there's a thin, bloody veil between worlds, the past isn't past at all, and you can feel your heart beating in the pages, the words pulsing with life. Touch them if you dare, and don't be surprised if they quiver into flight all around you.”—Stephen Graham Jones, NYT bestselling author of The Only Good Indians

“V. Castro writes like her blood is in the ink. Queen of the Cicadas is the best urban legend story since Candyman, layered and dark and hideously beautiful. It will get way under your skin. If Castro’s not already on your radar, she should be.”—Christopher Golden, NYT bestselling author of Alien: River of Pain

“Castro's novel shifts seamlessly from deliciously gory horror narrative to family saga to a tale of righteous vengeance, all while maintaining its unflinching condemnation of colonialism on both sides of the Mexican-American border.”—Kirkus starred review

“A riveting #ownvoices novel exploring Mexican folk tales and legends mingled with the history of Texas... Castro does not pull any punches.”—Booklist starred review

“A truly original and surprising work of fiction... Castro weaves several familiar tropes from the slasher and ghost story sub-genres into a blood-drenched (literally) story of both personal and cultural reclamation.”—Toronto Star

“A keenly written work of suspense that also reflects upon humanity's capacity for good and evil, The Queen of the Cicadas is a compelling page-turner for connoisseurs of the genre. Highly recommended.”—Midwest Book Review