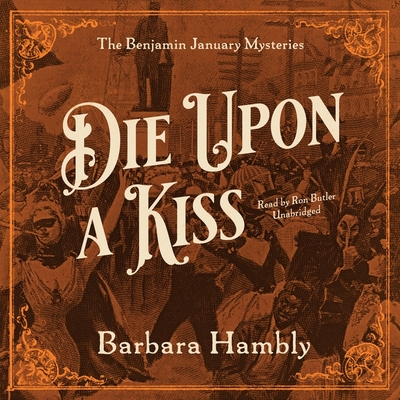 This is book number 5 in the Benjamin January Mysteries series.

In February 1835, the cold New Orleans streets are alight with masked Mardi Gras revelers as the American Theater's impresario, Lorenzo Belaggio, brings a magnificent yet controversial operatic version of Othello to town. But it's pitch-black in the alley where free man of color Benjamin January hears a slurred whisper, spies the flash of a knife, and is himself wounded as he rescues Belaggio from a vicious attack. Could competition for audiences--or for Belagio's affections--provoke such violent skulduggery? Or is Shakespeare's tragic tale, with its spectacle of a black man's passion for a white beauty, one that some Creole citizen--or American parvenu--would do anything to keep off the stage? The soaring music will lead January into a tangle of love, hate, and greed more treacherous than any onstage drama, as he must discover who is responsible ... and who will Die Upon a Kiss.