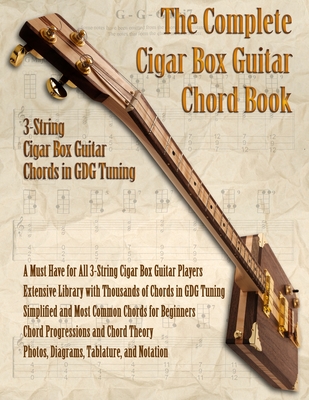 The Complete Cigar Box Guitar Chord Book is the most extensive library of chords ever assembled for the 3-string cigar box guitar. It's amazing that over 2000 chords are possible with only 3 strings, considering that two of the three strings on the cigar box guitar are tuned to the same note in GDG tuning. There are many "possible" chords though some more practical and easier to play. This extensive library will cover all the chords required to play any style of music.

A must-have for all cigar box guitar musicians

I have offered as many chords as possible in each of the 12 keys in music, as well as multiple voicings of each chord providing lots of chord choices. While there is the extensive library, I have also included the most played and user-friendly chords for most players.

Learning your favourite chords is the first step quickly followed by learning to switch the chords and play songs and chord progressions. There are many chord progressions in the book that are taken directly from some of the most popular songs ever written. There is a good selection of blues chord progressions that cover many of the standard blues changes in all keys. Also, take some time and play through some standard strumming and fingerpicking patterns. You will see these familiar patterns in many of your favourite songs. If you need to brush up on your chord theory there are several pages dedicated to how chords are formed, the chord numbering system, and chord formulas.