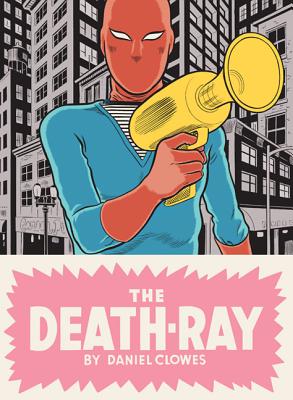 Delightfully bizarre in the warped tones that only Daniel Clowes can paint, The Death-Ray is a standalone graphic novel pulled from the iconically transgressive pages of legendary comic series Eightball. Teenage justice, absurd violence, and reflection on a life wasted as a small town supervillain illustrate the pages of this troubling masterwork.

ON TIME, NPR AND USA TODAY'S BEST-OF 2011 LISTS! WINNER OF THE EISNER, HARVEY AND IGNATZ AWARDS

Teen outcast Andy is an orphaned nobody with only one friend, the obnoxious—but loyal—Louie. They roam school halls and city streets, invisible to everyone but bullies and tormentors, until the glorious day when Andy takes his first puff on a cigarette. That night he wakes, heart pounding, soaked in sweat, and finds himself suddenly overcome with the peculiar notion that he can do anything. Indeed, he can, and as he learns the extent of his new powers, he discovers a terrible and seductive gadget—a hideous compliment to his seething rage—that forever changes everything.

The Death-Ray utilizes the classic staples of the superhero genre—origin, costume, ray gun, sidekick, fight scene—and reconfigures them in a story that is anything but morally simplistic. With subtle comedy, deft mastery, and an obvious affection for the bold pop-art exuberance of comic book design, Daniel Clowes delivers a contemporary meditation on the darkness of the human psyche.

Daniel Clowes is the acclaimed cartoonist of the seminal comic book series Eightball and the graphic novels Ghost World, David Boring, Ice Haven, Wilson, Mr. Wonderful, and The Death-Ray. He is the subject of the monograph The Art of Daniel Clowes: Modern Cartoonist, published in conjunction with a major retrospective exhibit. He is the Oscar-nominated screenwriter of Ghost World, Art School Confidential, and Wilson.

Clowes is the recipient of numerous awards including the PEN Award for literature, an Eisner, a Harvey, and an Ignatz, and a frequent cover artist for The New Yorker. He is married and lives in Oakland, CA.

“Daniel Clowes continues to plot a lofty, lonely course through the subconscious of popular culture with this hilariously bleak graphic novel.” —TIME Best of 2011

“48 pages densely packed with art, dialogue and ideas, The Death-Ray [is] supersaturated, a story delivered directly into your imagination...” —NPR

“Clowes once again shows he is a master of current-day absurdity -- with heart.” —USA Today

“The Death-Ray reads as a cautionary parable and an acidic rumination on the travails of adolescence . . . Clowes demonstrates what the comic book can do and literary fiction can't. ” —The Observer