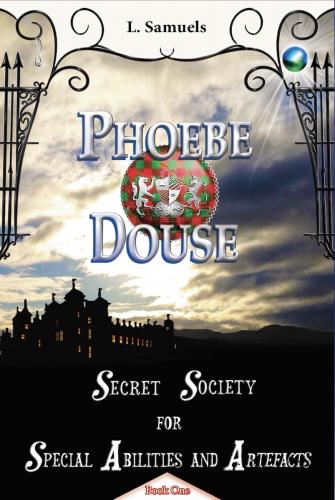 Grandmother Naan's superstitious stories seem too peculiar and childish to Phoebe Douse. But when surprising and unfortunate circumstances in Texas lead her to accept a timely invitation to attend a remote boarding school, thousands of miles away in Scotland, Phoebe finds that everything is not what she made herself believe.

Unwittingly, Phoebe is thrown onto the stage of power and danger as events unfold that reveal the extent of her abilities and Naan's connection to the school. There, Phoebe is introduced to the clandestine world of S3A2 and is forced to decide between her new friends and the promises of power and S3A2 status from the welcoming but strangely mysterious Headmaster Duff.

In this first installment of a YA trilogy (for ages 12 and up), Phoebe Douse: S3A2 presents an adventure-filled, coming-of-age novel, with mystery and a touch of the paranormal. There are also themes on self-discovery, valuing culture and diversity, and building trust and friendship.

L. Samuels was born and raised in Texas, with family from the Caribbean. She has been writing and drawing on anything she could get her hands on since she was a baby. Along with writing, L. Samuels operates a global education company, loves to travel, spend time with family, hike, and dance.

The author rounds out her tale with increasing suspense ... and a continually evolving backstory starting decades earlier.... As this is a series launch, the novel ends with copious material for sequels.... a delightful fantasy with a likable and powerful young heroine. ~ Kirkus Reviews

The characters are phenomenal, each with their own quirks and the role they play...Phoebe Douse has mystery and action with themes of friendship, secrets, and trust, which make for an addictive read from start to finish. You won't be able to put it down until you reach the end! ~ Liz Konkel for Readers' Favorite, 5-star review

Mixing the narrative style of traditional children's fiction with the modern sensibilities of the magical boarding school genre is no mean feat, but L. Samuels does a great job of delivering a fantasy genre novel with a classic literary feel. ~ K.C. Finn for Readers' Favorite, 5-star review

Intriguing is a mild way to describe Book 1 in the Phoebe Douse Trilogy.... At no time did the author's creative writing falter, it just got more fascinating. ~ Michelle Stanley for Readers' Favorite, 5-star review

The least agreeable aspect of the book is that the reader is left wanting to know what happens next and in the world of storytelling, this kind of itch usually happens after a satisfying read. ~ Literary Titan, 2019 Gold Award