We'll Be Back: The Fall and Rise of America (Hardcover) 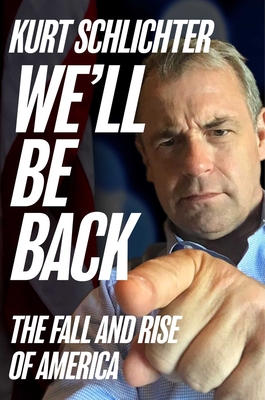 Humor and polemics from one of America's most quotable pundits. A call for renewal and a howl of laughter and derision at the woke mob that seeks to stand in the way of a great nation's patriotic resurgence. Fans of Mark Levin, Matt Walsh, and Ben Shapiro will love it!

In 1991, the smoldering ruins of Saddam Hussein’s regime testified to America’s unchallenged might. Having defeated one of the world’s largest armies in a matter of days, the United States looked forward to a new century of peace and prosperity.

Thirty years later, a ragtag Taliban chased us out of Afghanistan in a humiliating rout. At home, our cities are cesspools of homelessness and crime. The former land of opportunity seems to be in irreversible decline.

How did we suffer such an unimaginable fall? And is our current impotence permanent? With his trademark wit, Kurt Schlichter—warrior, lawyer, and commentator—makes a compelling case that America’s decline is not irreversible.

No Pollyanna, he offers a sobering catalogue of the dangers ahead, from subjugation to China to the poverty of socialism. Even civil war. But Schlichter was among the U.S. forces that took down the tyrant of Iraq in 1991. Having seen American greatness in action and appreciating the virtues that produced it, he knows that decline is a choice—a choice that we need not make.

Sometimes mordant, often humorous, always incisive, Schlichter shows that our resilience is far from spent. American society is uniquely blessed with the ingredients of greatness. A pushback is coming. Schlichter offers no guarantees but something more important—hope.

Kurt Schlichter is a senior columnist for Townhall.com, a Los Angeles trial lawyer, and a retired army infantry colonel.

A Twitter activist (@KurtSchlichter) with more than 350,000 followers, Kurt was personally recruited to write conservative commentary by Andrew Breitbart. He is a news source, an on-screen commentator on networks like Fox and Newsmax, and a guest on, and guest host of, nationally syndicated radio programs talking about political, military, and legal topics.