The Life And Legend Of Wallace Wood Volume 2 (Hardcover) 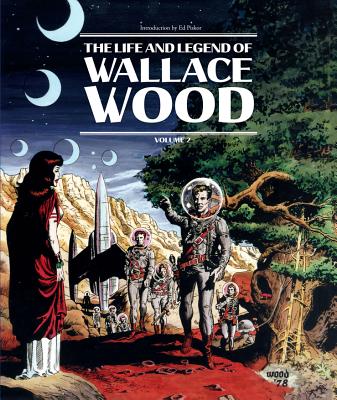 Volume 2 of the Eisner Award-nominated series The Life and Legend of Wallace Wood completes this revealing, intimate portrait of the brilliant but troubled maverick comics creator (EC Comics, Mad, Daredevil, T.H.U.N.D.E.R. Agents, witzend, The Justice Society of America, The Wizard King). Featuring the vivid personal recollections of the friends, colleagues, and assistants who knew him best and a cornucopia of gorgeous artwork and photos.

Wallace Allan Wood (1927–1981) is widely considered to be America’s greatest science fiction cartoonist, but he was also one of the brightest lights of the early Mad comic and, later, a pioneering alternative/underground cartoonist/publisher with his magazine witzend.

Bhob Stewart (b. 1937, Kirbyville, Texas, d. 2014, Plymouth, Massachusetts) divided his time between mass and fan media. He was chiefly a writer and editor, although he also drew and acted. He is best known for founding one of the first comics fanzines, EC Fan Bulletin, in 1953; for coining the term “underground comics”; and for art-directing the Hugo Award-winning science fiction fanzine Xero. Stewart invented the Wacky Packages trading card series for Topps, and wrote comics for clients such as Marvel and Heavy Metal. He worked in Wallace Wood’s studio for a time, and became the de facto steward of the influential EC cartoonist’s legacy. Co-author of Scream Queens with Calvin Beck, he edited the Mad Style Guide, and co-edited the seminal underground comics tabloid Gothic Blimp Works?. As an educator, he taught courses in Boston and at the School of Visual Arts in New York.

The Life And Legend Of Wallace Wood offers a rounded portrait of a conflicted creator. Rather than a conventional coffee-table retelling of the artist’s life and career, editors Bhob Stewart and J. Michael Catron have by structuring the book as a series of essays by eminent comics scholars and talents wisely chosen to spotlight a number of different kinds of tributes to the artist ... It’s difficult to imagine a more respectful package.

Fantagraphics’ biography of Wood is a remarkable collection of rare personal photographs, anecdotes from his contemporaries, and a broad sampling of the cartoonist’s beautiful artwork. This gorgeous, insightful tome is a must-have for armchair comics scholars and historians everywhere.
— Broken Frontier

The main draw of this lavish, oversized volume is the wealth of gorgeous artwork, the bulk of it comics pages. ... The visual grandeur on display is so overwhelming that the book, despite the lamentable fate of its subject, can’t help but ultimately be taken as a celebration of Wood’s abundant talent.
— Booklist