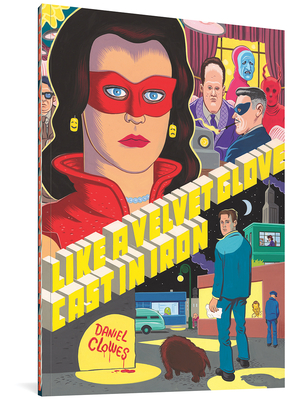 "Propelled through an upsettingly bizarre world by fever dream logic, this canticle of obsession and high strangeness glorifies the destruction of the self in service to the self. We sink through a surreal and nightmarish, neo-noir death spiral, abandoned by logic. Nothing happens for a reason, but everything happens for No Reason."

This is a redesigned reprint of Daniel Clowes’s early, unsettling graphic novel.

Clay Loudermilk stumbles into a screening of a bizarre snuff film that wraps him up in a mystery surrounding a series of cult-inspired killings, dubbed “The Harum Scarum Murders.” The subsequent path Loudermilk’s life takes is both a terrifying journey into madness and jaw-dropping tour-de-force of visual imagination fraught with psychosexual and conspiratorial tension.

Daniel Clowes (b. 1961, Chicago, Illinois) is an American cartoonist. He is a multi-Harvey, Eisner, and Ignatz Award Winner, and his papers have been acquired by the University of Chicago library. His most recent book, Patience, has been translated into nineteen languages, and his books and comics have won numerous awards, including a PEN America Literary Award and over a dozen Harvey and Eisner Awards. As a screenwriter, he has been nominated for an Academy Award and written the films Ghost World (with Terry Zwigoff), Art School Confidential, and Wilson. A retrospective of his work, Modern Cartoonist, debuted in 2012, appearing at the Museum of Contemporary Art in Chicago, the Oakland Museum, and the Wexner Center. His illustrations have been featured on a wide-ranging array of posters, album covers, and magazines, including many covers for The New Yorker. He lives in Oakland, California, with his wife and son.