Radio's Greatest of All Time (Hardcover) 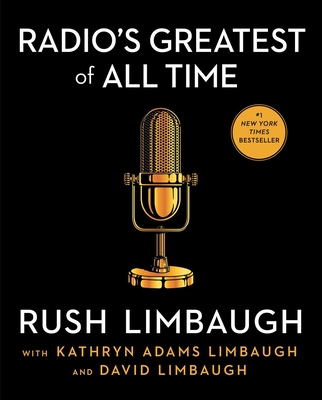 For more than thirty years, millions of listeners tuned in to hear Rush Limbaugh’s voice. At its peak, The Rush Limbaugh Show aired on more than 650 radio stations nationwide, and his inimitable commentary and distinctive sense of humor garnered a devoted audience that celebrated with him when he received the Presidential Medal of Freedom in 2020.

Rush’s passing the following year sent shock waves through the conservative and broadcasting communities. In this timeless collection of his best work, his triumphant legacy as the greatest voice for conservatism is cemented in history.

When Rush’s dear friend Vince Flynn first suggested the idea of this book, Rush considered the task daunting. “How can I possibly select the best of the best,” he joked, “from all the years of pure genius?” Over time, Rush came to love this project immensely, and recalled incredible details from his childhood and early career.

Featuring commentary from loved ones, family, friends, and prominent figures such as President Donald Trump, Supreme Court Justice Clarence Thomas, Governor Ron DeSantis, and more, Radio’s Greatest of All Time is the ultimate gift for any devoted listener and leaves no doubt about his profound impact on this country.

Rush Limbaugh was the host of The Rush Limbaugh Show—the nation’s highest-rated talk radio program, with an audience of more than 30 million—and was the #1 New York Times bestselling author of The Way Things Ought To Be; See, I Told You So; and the Adventures of Rush Revere book series. Visit OfficialRushLimbaugh.com.

Kathryn Adams Limbaugh is an American author and business executive. She is a #1 New York Times bestselling author, descendant of American Founding Father John Adams, president of the Rush and Kathryn Adams Limbaugh Family Foundation, and CEO of KARHL Holdings LLC. She is the creator and coauthor of the popular Adventures of Rush Revere middle grade American history book series, with all five bestsellers published between 2013 and 2016.

David Limbaugh is the son of Rush Limbaugh, Jr. and Mildred Armstrong Limbaugh. He attended the University of Missouri-Columbia and received his Juris Doctorate from the University of Missouri-Columbia Law School in 1978. While in law school, he was a Member of Missouri Law Review. He served in the National Guard from 1972 to 1978. He has been married to Lisa Limbaugh since 1986, and they have four children, three daughters, and a son.