A Lie Will Suffice: A DiGiovanni Family History (Paperback) 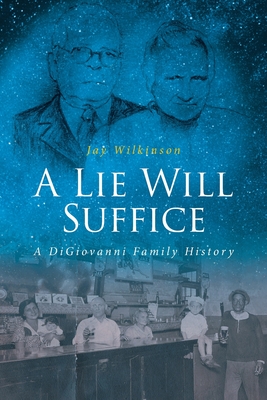 In 1893 Western Sicily, Gaetano DiGiovanni, twenty-five years old, foresees a day when he abandons his turbulent, hard-scrabble life in the Palermo Province hinterlands for the promise of America. His fourteen-and-a-half-year-old wife, Angelina Bucaro DiGiovanni, is at his side. Gaetano becomes an old-style Mafiosi "man of respect," called Don Tano Baiocco in Sicily and New Orleans. For the next half century, "Tano Baiocco" guides his burgeoning family through Atlantic Ocean crossings, murder, extortion, vendetta, bootlegging, hostage-taking Fascists cracking down on Sicilian Mafiosi, labor influence on the New Orleans banana docks, two criminal trials, a secret interment in the family burial vault, the Great Depression and World War II. Employing a culture-based nineteenth-century Sicilian mindset, including omerta and deception, Gaetano "Baiocco" DiGiovanni, his wife, children, and son-in-law, Natale Guinta, largely conceal the dark aspects of the family history from their offspring and following generations, who by the early twenty-first century have established themselves as pillars of their American communities. Then one day in 2009, one of Gaetano's many upright American granddaughters, distraught over her discovery of the truth about the 1921 Mafia assassination of Gaetano's oldest son, her Uncle Domenico, presents a few old newspaper articles to her own stunned son, the author of this book. She obliquely challenges him to dig out the whole truth of the family history. "One day, you're gonna write a book about my family," she says, "and it won't be so pretty. Why all the secrets? Why all the lies?" A Lie Will Suffice is the result of twelve years of research, cited in detailed endnotes and an extensive bibliography, that attempts to answer a mother's questions, to unravel and explain the sometimes difficult-to-discern, complex, but ultimately triumphant DiGiovanni-Guinta family history. It ends with the opaque revelation to the author by his Godfather, ten months before his Godfather's death, of the most closely held family secret.