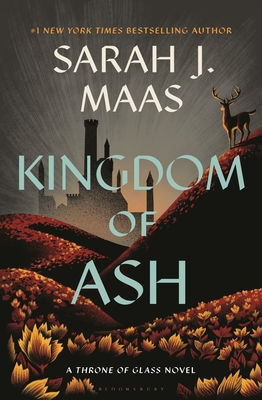 This is book number 7 in the Throne of Glass series.

The epic finale to the #1 bestselling Throne of Glass series by Sarah J. Maas.

Aelin Galathynius has vowed to save her people-but at a tremendous cost. Locked in an iron coffin by the Queen of the Fae, Aelin must draw upon her fiery will as she endures months of torture. The knowledge that yielding to Maeve will doom those she loves keeps her from breaking, but her resolve unravels with each passing day.

With Aelin captured, her friends and allies have scattered. Some bonds will grow even deeper, while others will be severed forever. But as destinies weave together at last, all must stand together if Erilea is to have any hope of salvation.

Sarah J. Maas's #1 New York Times bestselling Throne of Glass series draws to an explosive conclusion as Aelin fights for her life, her people, and the promise of a better world.

Sarah J. Maas is the #1 New York Times and internationally bestselling author of the Throne of Glass, Court of Thorns and Roses, and Crescent City series. Her books have sold millions of copies and are published in thirty-eight languages. She lives in California with her family.

“Action-packed . . . What a ride!” —Booklist on The Assassin's Blade

“An epic fantasy readers will immerse themselves in and never want to leave.” —Kirkus Reviews, starred review, on Crown of Midnight

“Celaena is as much an epic hero as Frodo or Jon Snow!” —New York Times bestselling author Tamora Pierce on Heir of Fire

“Turns a corner from sprawling epic to thrilling psychological fantasy.” —HuffPost on Tower of Dawn

“A worthy finale to one of the best fantasy book series of the past decade.” —Time on Kingdom of Ash