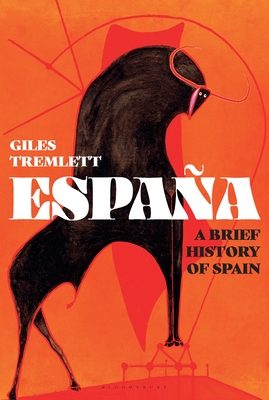 Bestselling author of Ghosts of Spain Giles Tremlett traverses the rich and varied history of Spain, from prehistoric times to today, in a brief, accessible primer with color illustrations throughout.

Spain's position on Europe’s southwestern corner has exposed the country to cultural, political, and literal winds blowing from all quadrants throughout the country’s ancient history. Africa lies a mere nine miles to the south, separated by the Strait of Gibraltar—a mountain range struck, Spaniards believe, by Hercules, in an immaculate and divine display of strength. The Mediterranean connects Spain to the civilizational currents of Phoenicians, Romans, Carthaginians, and Byzantines as well as the Arabic lands of the near east. Hordes from the Russian steppes were amongst the first to arrive. They would be followed by Visigoths, Arabs, and Napoleonic armies and many more invaders and immigrants. Circular winds and currents extended its borders to the American continent, allowing it to conquer and colonize much of the New World as the first ever global empire. Spain, as we know it today, was made by generations-worth of changing peoples, worshipping Christian, Jewish, and Muslim gods over time. The foundation of its story has been drawn and debated, celebrated and reproached. Whenever it has tried to deny its heterogeneity and create a “pure” national identity, the narrative has proved impossible to maintain.

In España, Giles Tremlett, who has lived in and written about Spain for over thirty years, swiftly traces every stretch of Spain’s history to argue that a lack of a homogenous identity is Spain's defining trait. With gorgeous color images, España is perfect for lovers of Spain and fans of international history.

Giles Tremlett is the Guardian's Madrid correspondent. He has lived in, and written about, Spain for the past twenty years.

"A book of rich detail … Mr. Tremlett embarks on a narrative marathon in 'España,' delivered at the speed of a sprint, from Spain’s earliest beginnings to the present day (Covid included). Such is his deftness as a storyteller that a reader will scarcely feel that anything important has been left on the cutting-room floor." - The Wall Street Journal

"An excellent introduction to a long and intricate history that extends over thousands of years." - San Francisco Book Review

“An enthusiastic history … A fresh, accessible take on a rich history; ideal reading for anyone planning a trip to Spain.” —Kirkus Reviews

"Aimed at curious visitors and hispanophiles alike, this accessible trot through the country’s history covers everything from Spain’s connections to the ancient empires of Rome and Byzantium, to its colonisation of swathes of the Americas." - BBC History Magazine

"Provides an excellent whistle-stop tour through the history that explains it all ... brisk and readable telling." - The New Statesman

“A remarkable act of scholarship, as well as being captivatingly readable ... a dazzling mosaic of vignettes and sources, of lives lived and lost, of acts of heroism, solidarity, betrayal and futility ... as close to a definitive history as we are likely to get.” —The Guardian, on THE INTERNATIONAL BRIGADES

“Nothing less than magisterial . . . rich details are provided through a combination of first-hand witness and participant accounts, newspaper articles, and secondary sources.” —The Boston Globe, on THE INTERNATIONAL BRIGADES

“A country finally facing its past could scarcely hope for a better, or more enamored chronicler of its present.” —The New York Times Book Review, on GHOSTS OF SPAIN