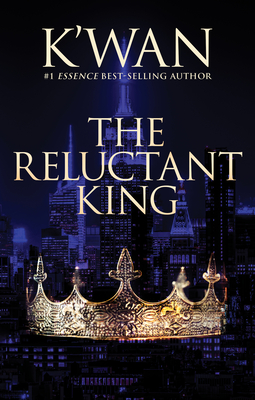 The King family is on the political rise in New York City, but must weather the violent storm wrought by their darkest secrets.

"K'wan is exceptionally gifted at ratcheting up suspense . . . There's no denying the writer's talent for dark, gritty fiction. It's a page-turner."
--Kirkus Reviews

"Just when you think you know how this story is going to end, K'wan hits you with one his infamous curveballs that will stop you in your tracks. The Reluctant King by K'wan is an enjoyable start to this new series and will make you anticipate the second installment."
--Urban Reviews Online

Meet the Kings, one of the most influential families in New York City. In the power circles of the movers and shakers, they are regarded as modern-day royalty. A politically connected father, a socialite mother, and three promising children: they look every bit the all-American family...but every family has secrets. Some darker than others.

Of all the children, Shadow is the least like the rest of the Kings. To call him soft wouldn't be quite accurate, but he lacks the leadership qualities of his older brother, Ghost, or the ruthless tendencies of his sister Lolli. Shadow is just...Shadow. Instead of accepting his role in the "Monarchy" created by his father, Shadow would rather spend his days chasing women and hanging out in the hood with his best friends, Fresh and Pain. He is totally oblivious to the perils that come with his last name--until danger introduces itself.

On the night of their mother's fiftieth birthday gala, their father, Chancellor, is set to announce his plans to turn his political focus beyond his current position as a member of the city council. He has tasted the benefits that come with holding office, and has the power and influence to make a serious run at climbing the political ladder.

The future is looking bright for the King family. That is, until the devil comes to claim his due, and threatens to destroy everything Chancellor has worked to build. To survive the coming storm, each member of the royal family will have to make a sacrifice, even those who are reluctant to wear the crown.

K'wan is the best-selling, award-winning author of more than thirty novels, including the wildly popular Animal series, Black Lotus, Black Lotus 2: The Vow, Gangsta, Road Dawgz, Street Dreams, Hoodlum, and Section 8. He has been featured in Vibe, King, Entertainment Weekly, and Time magazine. K'wan was the recipient of the 2012 and 2013 Street Lit Book Award Medals (SLBAM) in adult fiction for Eviction Notice and Animal. His credits also include featured commentary in the documentary Iceberg Slim: Portrait of a Pimp (produced by Ice-T) as well as a recurring role as an analyst on TV One's Celebrity Crime Files. K'wan resides in New Jersey.