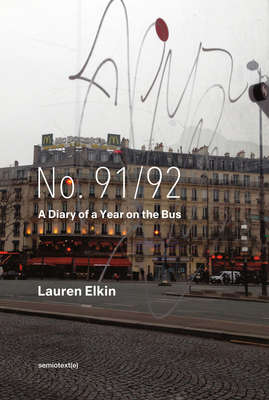 A love letter to Paris and a meditation on how it has changed in two decades, evolving from the twentieth century into the twenty-first, from analog to digital.

Your telephone is precious. It may be envied. We recommend vigilance when using it in public.
--Paris bus public notice

In fall 2014 Lauren Elkin began keeping a diary of her bus commutes in the Notes app on her iPhone 5c, writing down the interesting things and people she saw in a Perecquian homage to Bus Lines 91 and 92, which she took from her apartment in the 5th Arrondissement to her teaching job in the 7th.

Reading the notice, she decided to be vigilant when using her phone: she would carry out a public transport vigil, using it to take in the world around her and notice all the things she would miss if she continued using it the way she had been, the way everyone does--to surf the web, check social media, maintain her daily sense of self through digital interaction. Her goal became to observe the world through the screen of her phone, rather than using her phone to distract from the world.

During the course of that academic year, the Charlie Hebdo attacks occurred and Elkin had an ectopic pregnancy, requiring emergency surgery. At that point, her diary of dailiness became a study of the counterpoint between the everyday and the Event, mediated through early twenty-first century technology, and observed from the height of a bus seat. No. 91/92 is a love letter to Paris, and a meditation on how it has changed in the two decades the author has lived there, evolving from the twentieth century into the twenty-first, from analog to digital.

Lauren Elkin's last book, Flâneuse: Women Walk the City, was a finalist for the PEN/Diamonstein-Spielvogel Award for the Art of the Essay, a New York Times Notable Book of 2017, and a Radio 4 Book of the Week. She lives in Paris and Liverpool.