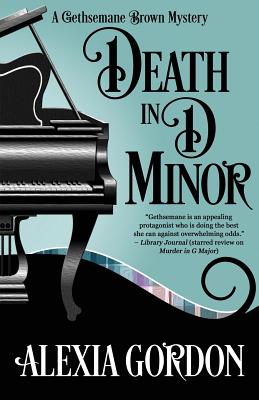 This is book number 2 in the Gethsemane Brown Mystery series.

"The captivating southwestern Irish countryside adds a delightful element to this paranormal series launch. Gethsemane is an appealing protagonist who is doing the best she can against overwhelming odds." - Library Journal (starred review on Murder in G Major)

Gethsemane Brown, African-American classical musician and expatriate to an Irish village, solved a string of murders, led a school orchestra to victory in a major competition, and got used to living with a snarky ghost. She can rest easy over the Christmas holiday. Right? Wrong. The ghost has disappeared, her landlord's about to sell her cottage to a hotel developer, and her brother-in-law is coming for a visit--with one day's notice.

She scrambles to call her spectral roomie back from beyond and find a way to save the cottage from certain destruction. But real estate takes a backseat when her brother-in-law is accused of stealing a valuable antique. Gethsemane strikes a deal with a garda investigator to go undercover as a musician at a charity ball and snoop for evidence linking antiques to a forgery/theft ring in exchange for the investigator's help clearing her brother-in-law. At the party, she accidentally conjures the ghost of an eighteenth-century sea captain, then ends up the prime suspect in the party host's murder. With the captain's help, she races to untangle a web of phony art and stolen antiques to exonerate herself and her brother-in-law. Then the killer targets her. Will she save herself and bring a thief and murderer to justice, or will her encore investigation become her swan song?

"Gethsemane Brown is everything an amateur sleuth should be: smart, sassy, talented, and witty even when her back is against the wall. In her latest adventure, she's surrounded by a delightful cast, some of whom readers will remember from Gordon's award-winning debut and all of whom they won't forget. Gordon writes characters we want resurrected." - Cate Holahan, Author of 2017 Silver Falchion Award-Nominated The Widower's Wife

"Erstwhile ghost conjurer and gifted concert violinist Gethsemane Brown returns in this thoroughly enjoyable follow-up to last year's Murder in G Major. Facing eviction from the historic seaside cottage she calls home, Gethsemane must clear her brother-in-law's name--as well as her own--when a priceless artifact goes missing and the wealthy dowager to whom it belonged is 'helped' over a high balcony railing. With the help of a spectral sea captain she accidentally summoned, Gethsemane tries to unravel the mystery as the murderer places her squarely in the crosshairs." - Daniel J. Hale, Agatha Award-Winning Author

Part of the Henery Press Mystery Series Collection, if you like one, you'll probably like them all.

Author Bio: A writer since childhood, Alexia Gordon won her first writing prize in the 6th grade. She continued writing through college but put literary endeavors on hold to finish medical school and Family Medicine residency training. She established her medical career then returned to writing fiction. Raised in the southeast, schooled in the northeast, she relocated to the west where she completed Southern Methodist University's Writer's Path program. She admits Texas brisket is as good as Carolina pulled pork. She practices medicine in North Chicago, IL. She enjoys the symphony, art collecting, embroidery, and ghost stories.