I Put a Spell on You: The Bizarre Life of Screamin' Jay Hawkins (Paperback) 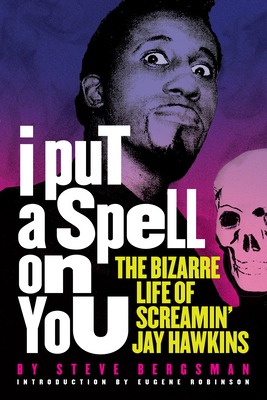 Screamin' Jay Hawkins was not a complicated man. He was a man with a simple appetite for life. It was his relentless pursuit of this appetite, however, that made his life a complicated one. Hawkins was a boxer, a soldier, a pianist, a singer, a charlatan, a tramp, a liar, and a star. "I Put a Spell on You" is the fascinating, frustrating, and triumphant saga of the novelty song that became one of the greatest rock and roll anthems of all time.

Screamin' Jay Hawkins released I Put a Spell On You in 1956. The song, that never made it to the charts when it was released, would eventually be covered several hundred times by the likes of Nina Simone, Credence Clearwater Revival, and Marilyn Manson; Jeff Beck and Joss Stone's version even received a Grammy nomination in 2010. It was selected as one of the Rock and Roll Hall of Fame's 500 Songs that Shaped Rock and Roll and was added to Rolling Stones' list of The 500 Greatest Songs of All Time. Hawkins' music and outlandish onstage persona inspired generations of musicians after him. And yet, little is known of the man and little can be taken at face value. Hawkins interpreted his past with a poetic license to kill, a magical amalgam of his own making--creating disparate stories alternatively terrible or sympathetic at his will. I Put A Spell On You brings together hundreds of interviews with Hawkins, his family, bandmates, and contemporaries. For those needing a towpath of truth, footnotes abound to tether you through. Here is Screamin' Jay Hawkins's story--mean, heartbreaking, and magic.