This Side of Home (Paperback) 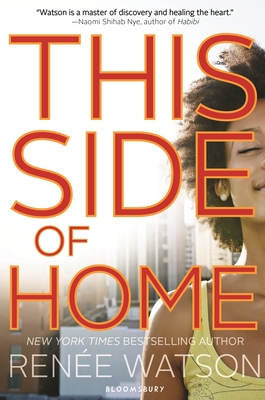 From Newbery Honor and Coretta Scott King Author Award winner Renée Watson comes a captivating and poignant coming-of-age urban novel about sisters, friends, and what it means to embrace change.

Maya Younger and her identical twin sister, Nikki, have always agreed on the important things. Friends. Boys. School. They even plan to attend the same historically African American college.
But nothing can always remain the same.

As their Portland neighborhood goes from rough-and-tumble to up-and-coming, Maya feels her connection to Nikki and their community slipping away. Nikki spends more time at trendy coffee shops than backyard barbecues, and their new high school principal is more committed to erasing the neighborhood’s "ghetto" reputation than honoring its history. Home doesn’t feel like home anymore. As Maya struggles to hold on to her black heritage, she begins to wonder with whom--or where--she belongs. Does growing up have to mean growing apart?

Renée Watson is a #1 New York Times bestselling author. Her novel, Piecing Me Together, received a Newbery Honor and Coretta Scott King Award. Her books include the Ryan Hart series, Some Places More Than Others, This Side of Home, What Momma Left Me, Betty Before X, cowritten with Ilyasah Shabazz, Watch Us Rise, cowritten with Ellen Hagan, and Love Is a Revolution, as well as acclaimed picture books: Maya's Song, The 1619 Project: Born on the Water, written with Nikole Hannah-Jones, A Place Where Hurricanes Happen, and Harlem’s Little Blackbird, which was nominated for an NAACP Image Award. Renée splits her time between Portland, Oregon and New York City.
www.reneewatson.net
@reneewauthor

“Watson paints a thoughtful, powerful picture of the complications of contemporary African- American experience, especially when it rubs up against the hipster middle class. . . . Without ever losing focus on the story of a group of likable teens working through changes during their senior year, Watson effectively manages character and situation to create a genuinely interrogative, genuinely multi-voiced perspective that reflects efforts to negotiate personal identity and desires amid unresolved problems of systemic racial injustice.” —starred review, BCCB

“An intriguing look at how families and young people cope with community and personal change. Readers may be surpised to find this multicultural story set in Portland, Oregon, but that just adds to its distinctive appeal. Here's hoping Watson's teen debut will be followed by many more.” —Kirkus Reviews

“Watson hits key topics of class, race, and changing neighborhoods while telling a story about growing up, growing apart, and how love can come out of the blue, as well as across racial lines.” —Publishers Weekly

“Watson's first book for young adults will impact the life of anyone who reads it. . . . at a time when there is a call for more diverse books, Watson brings to today's teens a story that needs to be read.” —VOYA

“A wonderful book that deals with racial stereotypes and is thoughtful, well-written, and timely.” —Library Media Connection

“In This Side of Home, Renée Watson's loving, descriptive powers are in full force. She's sharing a vibrant world so well, friends who make us care, crackling true voices and legacies, interweave of troubles, knowing a place, wanting it never to change except in good ways, holding on to friends, doorways, porches, rooms and rhythms, don't go, don't go, the tiny rich glories making it home. 'Sometimes you have to rewrite your own history,' she says, then she lets her people do it, reshaping . . . 'A cleansing is taking place' and it's the world we live in and she gives it back to us so we understand the mystery a little better even if we can't solve it, even if nothing is ever quite fair. There's more there, and she finds it.” —Naomi Shihab Nye, author of HABIBI