Wonder Woman Unbound: The Curious History of the World's Most Famous Heroine (Paperback) 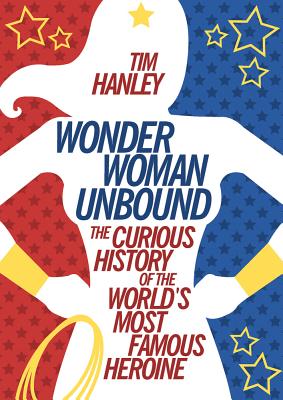 This close look at Wonder Woman’s history portrays a complicated heroine who is more than just a female Superman with a golden lasso and bullet-deflecting bracelets. The original Wonder Woman was ahead of her time, advocating female superiority and the benefits of matriarchy in the 1940s. At the same time, her creator filled the comics with titillating bondage imagery, and Wonder Woman was tied up as often as she saved the world. In the 1950s, Wonder Woman begrudgingly continued her superheroic mission, wishing she could settle down with her boyfriend instead, all while continually hinting at hidden lesbian leanings. While other female characters stepped forward as women’s lib took off in the late 1960s, Wonder Woman fell backwards, losing her superpowers and flitting from man to man. Ms. magazine and Lynda Carter restored Wonder Woman’s feminist strength in the 1970s, turning her into a powerful symbol as her checkered past was quickly forgotten. Exploring this lost history adds new dimensions to the world’s most beloved female character, and Wonder Woman Unbound delves into her comic book and its spin-offs as well as the myriad motivations of her creators to showcase the peculiar journey that led to Wonder Woman’s iconic status.

Tim Hanley is a comic book historian. He writes a blog, Straitened Circumstances, that discusses Wonder Woman and women in comics, and his monthly column, “Gendercrunching,” runs on www.bleedingcool.com. He has also written several articles for the Tumblr magazine DC Women Kicking Ass.

"I’ve never seen more information about Wonder Woman than in Wonder Woman Unbound! Author Tim Hanley tells us everything we’ve never asked about Wonder Woman because it simply never occurred to us: from her mythic Golden Age origins through her dismal Silver Age years as a lovesick romance comic character, and worse yet, when she lost her costume and powers in the late 1960s. Our favorite Amazon’s saga becomes upbeat again with the 1970s advent of Gloria Steinem and Ms Magazine, and Lynda Carter’s unforgettable portrayal of her on television. And it’s all told with a dollop of humor, thanks, Tim!"- Trina Robbins, author of Pretty in Ink, North American Women Cartoonists from 1896 to 2013

"Wonder Woman is the sum of her parts, and all of those parts should be examined thoroughly—something this book does very well." —Bust

"A lively and important examination of a key feminist icon." —Booklist

"There’s plenty here for Wonder Woman fans; Hanley writes with clarity and enthusiasm, and he’s got a fine eye for the goofy absurdities of comic-book narratives..." —Salon.com

"An entertaining and informative read. [Hanley] helpfully situates his subject in the universe of superhero comics and ably describes what made her seem unique and powerful to readers in her early years." —Library Journal

"Bondage, polyamory, lab coats, comic books, feminism: this story has everything. It's weird and complicated, but at least it has a good interpreter in Hanley." —Chicago Reader

"...the author offers a compelling and insightful consideration of a cultural icon that has endured and engaged with the culture for many decades without ever truly being known. A richly detailed, often-surprising work of comic-book scholarship." —Kirkus

"A useful companion history that’s good at placing the character in the setting of her comic-franchise peers." —New York Review of Books