Building Atlanta: How I Broke Through Segregation to Launch a Business Empire (Hardcover) 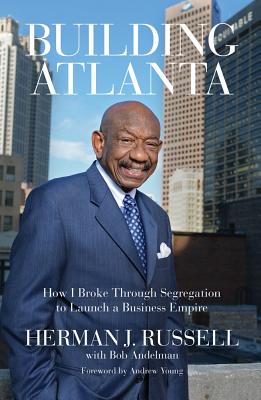 By Herman J. Russell, Bob Andelman, Andrew Young (Introduction by)
This item is currently unavailable and can not be ordered.
Out of Print

Born into a blue-collar family in the Jim Crow South, Herman J. Russell built a shoeshine business when he was twelve years old—and used the profits to buy a vacant lot where he built a duplex while he was still a teen. Over the next fifty years, he continued to build businesses, amassing one of the nation’s most profitable minority-owned conglomerates.

In Building Atlanta, Russell shares his inspiring life story and reveals how he overcame racism, poverty, and a debilitating speech impediment to become one of the most successful African American entrepreneurs, Atlanta civic leaders, and unsung heroes of the civil rights movement. Not just a typical rags-to-riches story, Russell achieved his success through focus, planning, and humility, and he shares his winning advice throughout. As a millionaire builder before the civil rights movement took hold and a friend of Dr. King, Ralph Abernathy, and Andrew Young, he quietly helped finance the civil rights crusade, putting up bond for protestors and providing the funds that kept King’s dream alive. He provides a wonderful behind-the-scenes look at the role the business community, both black and white working together, played in Atlanta’s peaceful progression from the capital of the racially divided Old South to the financial center of the New South.

Herman J. Russell was the founder, CEO, and chairman of the board of H. J. Russell and Company and Concessions International, as well as a nationally recognized entrepreneur, philanthropist, and Atlanta civic leader. Over the course of the last five decades he built one of the nation’s most profitable minority-owned business empires, transforming his father’s one-man plastering company into a construction and real estate conglomerate. Bob Andelman is the author or coauthor of 16 biographical, business, management, self-help, and sports books, including Built from Scratch with Bernie Marcus and Arthur Blank, the founders of Home Depot; Fans Not Customers with Vernon W. Hill, founder of Commerce Bank and Metro Bank UK; and Mind over Business with Ken Baum. He has written for BusinessWeek, Newsweek, and the St. Petersburg Times. He lives in St. Petersburg, Florida. Andrew Young is an activist and pastor, and a former politician and diplomat. He has served as the mayor of Atlanta, a congressman from Georgia’s fifth congressional district, and U.S. ambassador to the United Nations. A member of the Southern Christian Leadership Conference during the 1960s civil rights movement, he was a supporter and friend of Martin Luther King Jr. He lives in Atlanta, Georgia.

“Not many people alive in Atlanta today can look back and say they were involved with Dr. King, but Herman can do that. He’s been an important person in the history of this city.”  —Arthur Blank, cofounder, the Home Depot; owner, Atlanta Falcons

“Herman has been one of the pillars of the Atlanta community for many years, as a businessperson but also as a caring, concerned citizen. He’s made a lasting contribution, not just to Atlanta but to the nation.”  —John Lewis, U.S. representative, Georgia fifth congressional district

“I think that Herman Russell had as much to do with the rise of Atlanta as Ted Turner. Ted did a tremendous job in taking Atlanta all over the world via CNN and Herman did the same with his building empire.”  —Hank Aaron, Hall-of-Fame baseball player

“Here’s a man who, from his humble start working in his father’s plastering business, has gone on to reshape the urban landscape of many of America’s greatest cities.”  —Earl Graves, founder and publisher of Black Enterprise