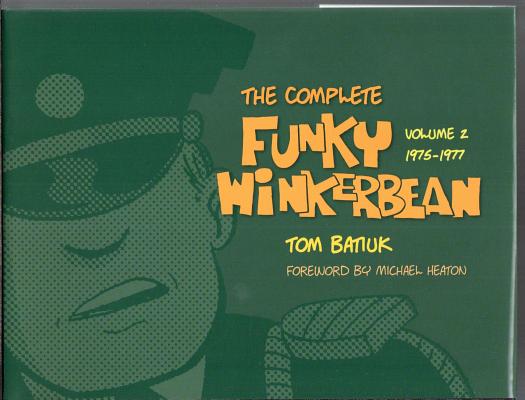 By Tom Batiuk, Michael Heaton (Foreword by)
$45.00
Out of Stock - Not Available

Funky, Les, and the gang pun their way through Westview High

Since its debut on March 27, 1972, Funky Winkerbean has chronicled the lives of a group of students from the fictitious Westview High School. This second volume, which presents strips from 1975, 1976, and 1977, sees the comic strip rounding into the form that will carry it into its middle years. With gentle humor and not-so-gentle puns, Les, Funky, Crazy Harry, and the gang comment on life's little absurdities.

Funky begins to ponder why there are cloakrooms in elementary schools when no one wears cloaks. Crazy Harry, firmly ensconced in his locker-as-living-quarters, moves out because his row of lockers has gone condo. Les Moore blossoms as a character and replaces Funky as the leader of the school's out crowd when he is seen alone on his bicycle at the local drive-in movie. The computer at Westview High becomes sentient and subjects the students to its obsession with Star Trek, including holding Star Trek conventions at the school. Westview's principal and teachers cope with it all with irony or Zen-like detachment.

In Volume 1, we met Harry L. Dinkle, the band director at West-view High. The self-proclaimed "World's Greatest Band Director," Dinkle is based on a retired band director from Avon Lake, Ohio, who was also the band director at the junior high school that Tom Batiuk attended. Band camps, the Fall Battle of the Bands, and the annual torrential downpours become fixtures in the strip. Other familiar themes are the turkeys and fruitcakes that show up through the years as band fund-raisers. The Westview Scapegoats go national and march off to the 1976 Macy's Thanksgiving Day Parade. Harry L. Dinkle marches into real life, lending his name to a line of Dinkles band shoes, actual band candy, and the "Harry L. Dinkle March" composed by Andy Clark. He even shows up on scoreboards at college football games.

Volume 2 includes an introduction in which Tom Batiuk shares the creative and evolutionary processes in his development of these characters. Subsequent volumes will each contain three years of Funky strips and will be published annually. Batiuk has been recognized for his humorous and entertaining portrayals of the students and staff at Westview and acclaimed for his sensitive treatment of social and educational issues.

Tom Batiuk is a graduate of Kent State University. His Funky Winkerbean and Crankshaft comic strips are carried in more than 600 newspapers worldwide and have an audience of more than sixty million readers. In 2008, he was honored as a finalist by the Pulitzer Board for a sequence in Funky Winkerbean that portrayed character Lisa Moore's poignant battle with breast cancer.