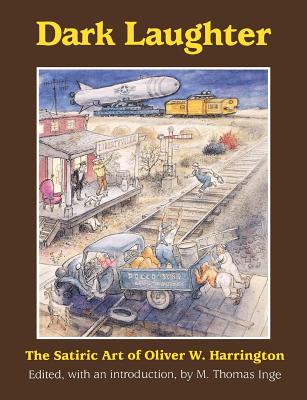 By M. Thomas Inge (Editor)
This item is currently unavailable and can not be ordered.

Dark Laughter: The Satiric Art of Oliver W. Harrington edited, with an introduction, by M. Thomas Inge It was none other than Langston Hughes who called Oliver Wendell Harrington America's greatest black cartoonist. Yet largely because he chose to live as an expatriate far from the American mainstream, he has been almost entirely overlooked by contemporary historians and scholars of African American culture. Born in 1912 and a graduate of the Yale School of Fine Arts, he was a prolific contributor of humorous and editorial cartoons to the black press in the 1930s and 1940s, but he achieved fame for his creation of a cartoon panel called Dark Laughter, a satire of Harlem society and featuring Bootsie, a character in the tradition of the wise fool. Bootsie became widely known and loved wherever black newspapers appeared. For airing strong antiracist views Harrington was targeted during the McCarthy era, and in 1951 he was self-exiled in Paris. In 1961 he found himself trapped behind the Berlin Wall, but he chose to remain in East Germany. His powerful political cartoons were published in East German magazines and in the American Communist newspaper The Daily World. He became a favorite among students and intellectuals in the Eastern Bloc. In America he was mainly forgotten. Here, selected from the Walter O. Evans Collection of African-American Art, is an omnibus of Harrington's best cartoons from the past four decades. It highlights his exceptional talent, his potent impact with editorial comment and social criticism, and his deserving of acclaim in his native land. M. Thomas Inge is the Robert Emory Blackwell Professor of Humanities at Randolph-Macon College. He is the author or editor of more than thirty books.