Albert Murray: Collected Essays & Memoirs (LOA #284): The Omni-Americans / South to a Very Old Place / The Hero and the Blues / Stomping the Blues / The Blue Devils of Nada / other writings (Library of America Albert Murray Edition #1) (Hardcover) 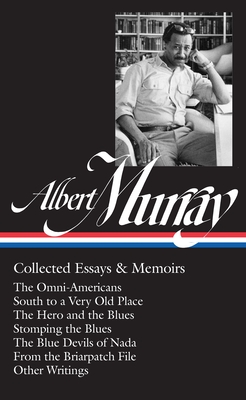 This is book number 1 in the Library of America Albert Murray Edition series.

In his 1970 classic The Omni-Americans, Albert Murray (1916–2013) took aim at protest writers and social scientists who accentuated the “pathology” of race in American life. Against narratives of marginalization and victimhood, Murray argued that black art and culture, particularly jazz and blues, stand at the very headwaters of the American mainstream, and that much of what is best in American art embodies the “blues-hero tradition”— a heritage of grace, wit, and inspired improvisation in the face of adversity. Murray went on to refine these ideas in The Blue Devils of Nada and From the Briarpatch File, and all three landmark collections of essays are gathered here for the first time, together with Murray’s memoir South to a Very Old Place--inspiration for Imani Perry's South to America, his brilliant lecture series The Hero and the Blues, his masterpiece of jazz criticism Stomping the Blues, and eight previously uncollected pieces.

LIBRARY OF AMERICA is an independent nonprofit cultural organization founded in 1979 to preserve our nation’s literary heritage by publishing, and keeping permanently in print, America’s best and most significant writing. The Library of America series includes more than 300 volumes to date, authoritative editions that average 1,000 pages in length, feature cloth covers, sewn bindings, and ribbon markers, and are printed on premium acid-free paper that will last for centuries.

Henry Louis Gates Jr., co-editor, is the Alphonse Fletcher University Professor and Director of the Hutchins Center for African and African American Research at Harvard University. Emmy Award–winning filmmaker, literary scholar, journalist, cultural critic, and institution builder, Gates has authored or coauthored twenty-one books and created fifteen documentary films. He is the editor of two other volumes in the Library of America series, Frederick Douglass: Autobiographies and, with William L. Andrews, Slave Narratives.

Paul Devlin, co-editor, teaches English at the U.S. Merchant Marine Academy and has published essays and criticism in many periodicals. He is the editor of Murray Talks Music: Albert Murray on Jazz and Blues (2016) and Rifftide: The Life and Opinions of Papa Jo Jones, as told to Albert Murray (2011), a finalist for the Jazz Journalists Association’s book award.

"Albert Murray's best nonfiction has been gathered in a plump and welcome volume from the Library of America. . . . His writing about racism can prickle your skin. . . . To paraphrase Murray's praise of Ellison's Invisible Man, reading this book is like watching someone take a 12-bar blues song and score it for a full orchestra." — Dwight Garner, The New York Times

"Murray — renaissance man, blues philosopher, resolute non-victim — was almost criminally overlooked in the previous century. Perhaps this was because he was constitutionally incapable of suffering fools of any complexion and insisted on pointing out the most elemental truths: 'The United States is in actuality not a nation of black people and white people. It is a nation of multicolored people,' Murray notes in his masterpiece, The Omni-Americans. We are in desperate need of such lucidity. If the arc of the intellectual universe also bends towards justice, then the Library of America’s canonization will resituate Murray alongside contemporaries James Baldwin and Ralph Ellison." —New York Magazine "100 Best Books of the Twentieth Century"