Riders in the Chariot (Paperback) 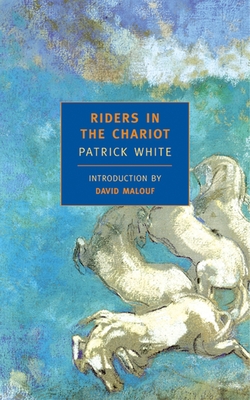 Patrick White's brilliant 1961 novel, set in an Australian suburb, intertwines four deeply different lives. An Aborigine artist, a Holocaust survivor, a beatific washerwoman, and a childlike heiress are each blessed—and stricken—with visionary experiences that may or may not allow them to transcend the machinations of their fellow men. Tender and lacerating, pure and profane, subtle and sweeping, Riders in the Chariot is one of the Nobel Prize winner's boldest books.

Patrick White (1912-1990) was born in London and traveled to Sydney with his Australian parents six months later. White was a solitary, precocious, asthmatic child and at thirteen was sent to an English boarding school, a miserable experience. At eighteen he returned to Australia and worked as a jackaroo on an isolated sheep station. Two years later, he went up to Cambridge, settling afterwards in London, where he published his first two books. White joined the RAF in 1940 and served as an intelligence officer in the Middle East. At war’s end, he and his partner, Manoly Lascaris, bought an old house in a Sydney suburb, where they lived with their four Schnauzers. For the next eighteen years, the two men farmed their six acres while White worked on some of his finest novels, including The Tree of Man(1955), Voss (1957), and Riders in the Chariot (1961). When he was awarded the Nobel Prize in 1973, he did not attend the ceremony but, with his takings and some of his own money, created an award to help older writers who hadn’t received their due: the first recipient was Christina Stead. Late in life, when asked for a list of his loves, White responded: “Silence, the company of friends, unexpected honesty, reading, going to the pictures, dreams, uncluttered landscapes, city streets, faces, good food, cooking small meals, whisky, sex, pugs, the thought of an Australian republic, my ashes floating off at last.”

David Malouf is a novelist and poet. His novel The Great Worldwas awarded the Commonwealth Prize and Remembering Babylon was short-listed for the Booker Prize. He has received the IMPAC Dublin Literary Award and the Los Angeles TimesBook Award. He lives in Sydney, Australia.

A poetically vivid narrative…It is a finely written novel with a rare flavor.
— Pittsburgh Post-Gazette

Riders in the Chariot is the most compassionate and the most beautiful of all Patrick White’s works; colours fly everywhere; his words, comic, ecstatic, are like the brushstrokes on a canvas by Nolan or Blake.
— Carmen Callil and Colm Tóibín, The Modern Library: The 200 Best Novels in English Since 1950

Patrick White is an outsider, and his characters are outsiders, outlaws, afflicted, and linked by their affliction. The visionary element in his novels is inseparable from a tough irony and a microscopically close, sometimes savage attention to physical minutiae. The coarser the texture of the physical—of bodies especially—the more likely to be illuminated by flashes of meaning and power.
— Rosemary Dinnage