We Keep the Dead Close: A Murder at Harvard and a Half Century of Silence (Compact Disc) 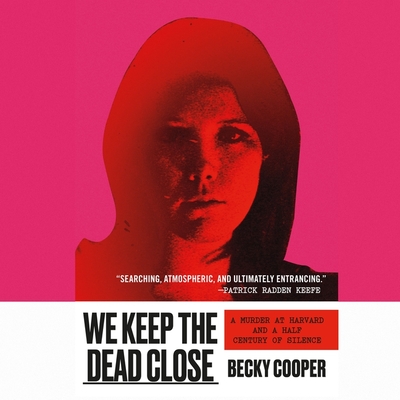 "Becky Cooper heard a bit of Harvard folklore one day when she was an undergrad: an anthropology PhD student had been murdered in her off-campus apartment in the ‘60s by a professor with whom she’d had an affair. The case was never solved. Something about the tale struck a chord with Cooper, and she ended up sucked into an attempt to find answers about the murder of Jane Britton for the next ten years of her life. In this book, she investigates the myths and suspicions and gossip. Throughout, Cooper is interrogating her own biases as well as our cultural obsession with compelling narratives. The reflective nature of the book is remarkable and, in my opinion, an important step away from academic “objectivity” (hi, not a thing) to acknowledging our positionality in relation to our research. We Keep the Dead Close, while engrossing, is not a page turner. It’s deliberate and encompassing, inviting the reader along Cooper’s circuitous, haunted search for some semblance of truth. It’s both a true crime drama and a deeply personal account of our entanglement with truth, justice, storytelling, and culture-making."

“As much a journey for the writer as it is for the reader, this book solves a murder but leaves us with many unanswered questions. We Keep the Dead Close challenges us to question our assumptions as well as the paths we use to arrive at those assumptions. Delving into the academic culture of Harvard, the misogyny of the 1960s, and the burgeoning women’s rights movement, the story follows several threads, all of which have a significant impact on the life of Jane Britton, whose story is told with empathy, compassion, and five decades of curiosity.”
— Camille Kovach, Completely Booked, Murrysville, PA

“We follow Becky Cooper as she investigates the murder of a Harvard student from forty years ago. Not only are we trying to solve the mystery, we get a view of the secret world of Harvard. An addicting read true crime enthusiasts will enjoy!”
— Deanna Bailey, Story on The Square, McDonough, GA

For readers gripped by In Cold Blood and I'll Be Gone in the Dark, We Keep the Dead Close is both a haunting true crime narrative of an unsolved 1969 murder at a prestigious institution and a lyrical memoir of obsession and love for a girl who dreamt of rising among men. You have to remember, he reminded me, that Harvard is older than the U.S. government. You have to remember because Harvard doesn't let you forget. 1969: the height of counterculture and the year universities would seek to curb the unruly spectacle of student protest; the winter that Harvard University would begin the tumultuous process of merging with Radcliffe, its all-female sister school; and the year that Jane Britton, an ambitious 23-year-old graduate student in Harvard's Anthropology Department and daughter of Radcliffe Vice President J. Boyd Britton, would be found bludgeoned to death in her Cambridge, Massachusetts apartment.

Forty years later, Becky Cooper a curious undergrad, will hear the first whispers of the story. In the first telling the body was nameless. The story was this: a Harvard student had had an affair with her professor, and the professor had murdered her in the Peabody Museum of Archaeology and Ethnology because she'd threatened to talk about the affair. Though the rumor proves false, the story that unfolds, one that Cooper will follow for ten years, is even more complex: a tale of gender inequality in academia, a 'cowboy culture' among empowered male elites, the silencing effect of institutions, and our compulsion to rewrite the stories of female victims.

WE KEEP THE DEAD CLOSE is a memoir of mirrors, misogyny, and murder. It is at once a rumination on the violence and oppression that rules our revered institutions, a ghost story reflecting one young woman's past onto another's present, and a love story for a girl who was lost to history.