Supergods: What Masked Vigilantes, Miraculous Mutants, and a Sun God from Smallville Can Teach Us about Being Human (MP3 CD) 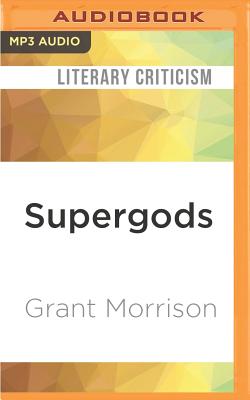 Grant Morrison is a great, unsung anthropologist of disposable culture. In addition to providing a thorough survey of comic book history, this exploration of a subculture ascendant tells us what a bunch of make-believe freaks, mutants, aliens, robots, and demigods reveals about the species that created them. Not since "The Hero with a Thousand Faces" has an academic work so comprehensively analyzed the mythical structures and archetypes of human storytelling.

From one of the most acclaimed and profound writers in the world of comics comes a thrilling and provocative exploration of humankind's great modern myth: the superhero.

The first superhero comic ever published, Action Comics #1 in 1938, introduced the world to something both unprecedented and timeless: Superman, a caped god for the modern age. In a matter of years, the skies of the imaginary world were filled with strange mutants, aliens, and vigilantes: Batman, Wonder Woman, the Fantastic Four, Iron Man, and the X-Men--the list of names is as familiar as our own. In less than a century, they've gone from not existing at all to being everywhere we look: on our movie and television screens, in our videogames and dreams. But what are they trying to tell us?

For Grant Morrison, arguably the greatest of contemporary chroniclers of the superworld, these heroes are powerful archetypes whose ongoing, decades-spanning story arcs reflect and predict the course of human existence: Through them we tell the story of ourselves, our troubled history, and our starry aspirations. In this exhilarating work of a lifetime, Morrison draws on art, science, mythology, and his own astonishing journeys through this shadow universe to provide the first true history of the superhero--why they matter, why they will always be with us, and what they tell us about who we are... and what we may yet become.

"Grant Morrison is one of the great comics writers of all time. I wish I didn't have to compete with someone as good as him."
--Stan Lee