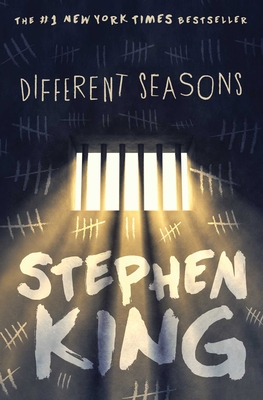 Includes the stories “The Body” and “Rita Hayworth and Shawshank Redemption”—set in the fictional town of Castle Rock, Maine

A “hypnotic” (The New York Times Book Review) collection of four novellas—including the inspirations behind the films Stand By Me and The Shawshank Redemption—from Stephen King, bound together by the changing of seasons, each taking on the theme of a journey with strikingly different tones and characters.

Next is “Apt Pupil,” the inspiration for the film of the same name about top high school student Todd Bowden and his obsession with the dark and deadly past of an older man in town.

In “The Body,” four rambunctious young boys plunge through the façade of a small town and come face-to-face with life, death, and intimations of their own mortality. This novella became the movie Stand By Me.

Finally, a disgraced woman is determined to triumph over death in “The Breathing Method.”

“The wondrous readability of his work, as well as the instant sense of communication with his characters, are what make Stephen King the consummate storyteller that he is,” hailed the Houston Chronicle about Different Seasons.

"To find the secret of his success, you have to compare King to Twain and Poe, with a generous dash of Philip Roth and Will Rogers thrown in for popular measure. King’s stories tap the roots of myth buried in all our minds."
— Los Angeles Times

"Buy Different Seasons. I promise you’ll enjoy it… King creates people who are so alive, you can almost sense them."
— Minneapolis Star-Tribune

"The wondrous readability of his work, as well as the instant sense of communication with his characters, are what make King the consummate storyteller that he is."
— Houston Chronicle

"No demons chortle from the closet, no vampires droll beneath the moon. Instead King’s ragged claws reach from ambush into the wholesome light of daily life--what could be more frightening than that?"
— Cosmopolitan

"A horror quartet by a spellbinding storyteller, master of suspense who leads you into plots like a guide through minefield."
— Portland Oregonian

"A spellbinding storyteller… A feast of horror fit for a king."
— San Diego Union