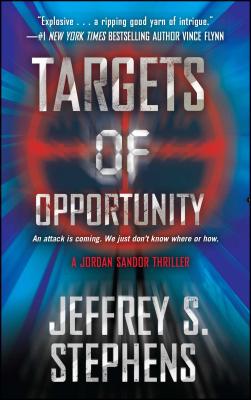 By Jeffrey S. Stephens
This item is currently unavailable and can not be ordered.
Out of Print

Whisked from his Manhattan town house to a gabled CIA safe house in Virginia, Sandor faces off with a top terrorist agent from Iran’s Revolutionary Guard. In exchange for protection from his own side, Ahmad Jaber is offering the CIA explosive information: word of a secret, unholy alliance forged among operatives in the Middle East, a ruthless South American, and Kim Jong-Il’s North Korea. Jaber claims not to know specific details, only that the strike will target the heart of America.

The fanatics stage a stunning diversion in the Caribbean, mercilessly downing a passenger jet and unleashing an assault on a French intelligence installation. Sandor, however, has already moved in a different direction. Leveraging Jaber’s infor-mation, he assembles a small strike force to penetrate North Korea. The team knows they will not all return, but the intel they gather will be vital to American security. What they ultimately discover plunges Sandor into a frantic race against time, struggling to defeat a shadowy figure—a master terrorist with a plan of destruction so perfectly disguised that even with the new knowledge he has gathered, Sandor cannot guess where or how he will strike.

As a storm rages in the Gulf of Mexico, word comes that two submarines have penetrated U.S. waters. With the U.S. military hampered by the hurricane, Sandor turns to a few daring U.S. Navy SEALs to duel with the enemy they cannot see . . . for now they know only that there are two nuclear weapons aimed at a target of opportunity whose destruction would change the world order forever.

Brilliantly conceived, electrifyingly paced, Targets of Opportunity captures a terrifying twenty-first century reality: terrorists can—and will—try as many times as they need to attack the United States. For the brave men and women who defend our country, failure is not an option.

Jeffrey S. Stephens is a native New Yorker who now lives in Greenwich, Connecticut with his wife Nancy, where they raised their two sons, Graham and Trevor. Stephens is the author of the Jordan Sandor thrillers Targets of Deception and Targets of Opportunity.