Death, Disability, and the Superhero: The Silver Age and Beyond (Paperback) 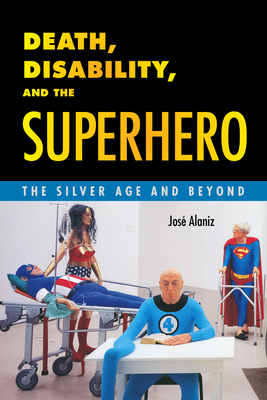 By Jose Alaniz
This item is currently unavailable and can not be ordered.

The Thing. Daredevil. Captain Marvel. The Human Fly. Drawing on DC and Marvel comics from the 1950s to the 1990s and marshaling insights from three burgeoning fields of inquiry in the humanities--disability studies, death and dying studies, and comics studies--Jos Alaniz seeks to redefine the contemporary understanding of the superhero. Beginning in the Silver Age, the genre increasingly challenged and complicated its hypermasculine, quasi-eugenicist biases through such disabled figures as Ben Grimm/The Thing, Matt Murdock/Daredevil, and the Doom Patrol.

Alaniz traces how the superhero became increasingly vulnerable, ill, and mortal in this era. He then proceeds to a reinterpretation of characters and series--some familiar (Superman), some obscure (She-Thing). These genre changes reflected a wider awareness of related body issues in the postwar United States as represented by hospice, death with dignity, and disability rights movements. The persistent highlighting of the body's imperfection comes to forge a predominant aspect of the superheroic self. Such moves, originally part of the Silver Age strategy to stimulate sympathy, enhance psychological depth, and raise the dramatic stakes, developed further in such later series as The Human Fly, Strikeforce: Morituri, and the landmark graphic novel The Death of Captain Marvel, all examined in this volume. Death and disability, presumed routinely absent or denied in the superhero genre, emerge to form a core theme and defining function of the Silver Age and beyond.