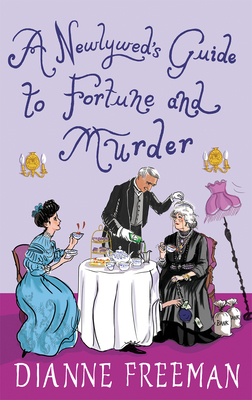 This is book number 6 in the A Countess of Harleigh Mystery series.

From Agatha Award-winning author Dianne Freeman, the Countess of Harleigh Mysteries are a witty romp through the high society of Victorian England with a touch of romance, an appealing and independent female lead, and rich historical detail. In this delightful sixth installment, the American-born newlywed Frances Hazelton finds her honeymoon plans derailed by a murder among the upper crust of English society…“Pure unadulterated fun” (Publishers Weekly) for fans of Ashley Weaver, Deanna Raybourn, and Tasha Alexander!

With her new husband George busy on a special mission for the British Museum, Frances has taken on an assignment of her own. The dowager Viscountess Wingate needs someone to sponsor her niece, Kate, for presentation to Queen Victoria. Frances—who understands society’s quirks and constraints as only an outsider can—is the perfect candidate.

Kate is charming and intelligent, though perhaps not quite as sheltered as she might first appear. More worrying to Frances is the viscountess’s sudden deterioration. The usually formidable dowager has become shockingly frail, and Frances suspects someone may be drugging her. The spotlight falls on Kate, who stands to inherit if her aunt passes, yet there are plenty of other likely candidates within the dowager’s household, both above and belowstairs.

Joining forces with her beloved George, Frances comes to believe that the late viscount, too, was targeted. And with the dowager seeming to be in greater danger every day, they must flush out the villain before she follows in her husband’s footsteps, directly to the grave . . .

Dianne Freeman is the acclaimed author of the Agatha and Lefty Award-winning Countess of Harleigh Mysteries, a two-time finalist for the Macavity’s Sue Feder Memorial Award, and a finalist for the Mary Higgins Clark Award. She spent thirty years working in corporate accounting and finance and now writes full-time. Born and raised in Michigan, she and her husband now split their time between Michigan and Arizona. Visit her at DiFreeman.com.

Praise for the Countess of Harleigh Mystery series

“The Victorian backdrop perfectly sets off this amusing and challenging romantic mystery.” —Kirkus Reviews on A Bride’s Guide to Marriage and Murder

“The fifth in Freeman’s ‘Countess of Harleigh Mystery’ series is a delightful cozy that educates readers about the role of women in Victorian England and entertains at the same time.” —Library Journal on A Bride’s Guide to Marriage and Murder

“Will appeal to fans of Regency and Victorian cozies that are heavy on romance, as well as to followers of Elizabeth Peters and Deanna Raybourn.” —Booklist on A Bride’s Guide to Marriage and Murder

“Danger, drama, and intrigue combine in this whodunit.”  —Woman’s World Book Club Pick on A Bride’s Guide to Marriage and Murder

“The American-born countess’s skills in maneuvering as an amateur sleuth in Victorian society are on full display in this charming historical mystery. New readers can easily pick up this fourth in the series, and fans will delight in the dramatic conclusion." —Library Journey, (STARRED REVIEW) for A Fiancee’s Guide to First Wives and Murder

"The plot gallops along, with an engaging supporting cast helping to lead both the couple and readers through a merry path of false leads and ever-shifting suspects, all enhanced by the neatly drawn Victorian setting. Fans of Deanna Raybourn's Veronica Speedwell novels will enjoy this latest entry in Freeman's engaging series." —Booklist on A Fiancee’s Guide to First Wives and Murder

"Amusing social mores in Victorian England make for a highly entertaining mystery." —Kirkus Reivew on A Fiancee’s Guide to First Wives and Murder

“Delightful…Frances will do whatever she needs to get to the bottom of Irena’s murder and ensure her own happily ever after.” —MYSTERY SCENE MAGAZINE on A Fiancee’s Guide to First Wives and Murder

“This mystery has a well-drawn setting and enough quirky twists to intrigue and content the reader. And the characters are people it’s enjoyable to spend time with. Frances’s identity as an American married into the British aristocracy (and as a strong-minded, intelligent woman) provides an interesting view into the Victorian upper crust’s stratified culture.” —HISTORICAL NOVEL SOCIETY on A Fiancee’s Guide to First Wives and Murder

“A delightful tale of British turn-of-the-century manners in the face of a tragic crime as well as a light-hearted love story.” —NEW YORK JOURNAL OF BOOKS on A Fiancee’s Guide to First Wives and Murder

“The storylines and plots get more intricate, which is a pleasure for astute readers…One can only hope future books continue this pattern of growth and intrigue.” —REVIEWING THE EVIDENCE on A Fiancee’s Guide to First Wives and Murder

“A Fiancée’s Guide to First Wives and Murder is a very enjoyable outing from Dianne Freeman—what’s next for Frances and George?” —CRIMINAL ELEMENT

“Fans of Sherlock Holmes and Murder on the Orient Express will delight over this tale.” —Woman’s World Book Club Pick for A Lady’s Guide to Mischief and Murder

“The action builds to a strong denouement.” —Publishers Weekly on A Lady’s Guide to Mischief and Murder

“A Lady’s Guide to Mischief and Murder is a thoroughly enjoyable closed-circle-of-suspects mystery, and the shooting-party atmosphere adds to the ambiance.” —Criminal Element

"Fans of witty, lighthearted Victorian mysteries will be enthralled." —Publishers Weekly, STARRED REVIEW on A Lady's Guide to Etiquette and Murder

"This delightful debut historical mystery introduces an appealing and smart female lead who relishes her newfound independence.
The supporting cast of equally captivating characters further complement this atmospheric historical, set in the ballrooms and
breakfast rooms of Victorian London. Fans of Georgette Heyer will appreciate the hints of romance, while aficionados of Deanna
Raybourn or D.M. Quincy will delight in the banter-filled dialogue and period details." —Library Journal, STARRED REVIEW on A Lady's Guide to Etiquette and Murder

"If practiced well, the oft-maligned art of gossip can unearth as much evidence as a CSI team...Dianne Freeman handles class disparity with care and has created a world that readers will want to explore in more depth as the series continues." —BookPage on A Lady's Guide to Gossip and Murder

"Engrossing...Freeman takes a witty look at Victorian polite society. Historical mystery fans will be delighted." —Publishers Weekly on A Lady's Guide to Gossip and Murder

"A charming period mystery with enough sexual tension and credible suspects to keep the reader guessing." —Kirkus Reviews on A Lady's Guide to Gossip and Murder

"The full cast of talkative aristocrats, the lighthearted tone, and the fast pace will keep readers actively engaged. This would make a wonderful introduction to cozy mysteries for fans of Regency or Victorian romance, and it will also hit the mark for followers of Elizabeth Peters and Deanna Raybourn." —Booklist on A Lady's Guide to Gossip and Murder

"This novel will appeal to readers who love a multi-layered mystery with twists and turns until the very end. So many dead ends turn into leads; so many clues seem meaningless, but then become keys to the solution. In the beginning, what seems to be an ordinary whodunnit becomes anything but, as Frances and George's romance heats up, along with more revelations that pull the reader along." —Historical Novels Review on A Lady's Guide to Gossip and Murder

"Wide-ranging and absorbing and includes some clever surprises." —Mystery Scene on A Lady's Guide to Gossip and Murder

"Lovers of acrostics and word-puzzles will find much to enjoy in A Lady's Guide to Gossip and Murder and will undoubtedly look forward to Lady Frances's next Lady's Guide adventure." —Criminal Element

"Set in late-Victorian London, this debut is engaging to the end as Frances and friends struggle to get behind the social facades to the truth." —Booklist on A Lady's Guide to Etiquette and Murder

"This lighthearted debut tale of mystery, love, and a delightful sleuth will leave you wanting more--which is presumably just what Freeman has in mind." —Kirkus Reviews on A Lady's Guide to Etiquette and Murder

"Readers will certainly want more of the beautiful, headstrong Countess Frances Wynn after finishing the first book in this brand-new series." —New York Journal of Books on A Lady's Guide to Etiquette and Murder

"A delightful tale of shenanigans among the British aristocracy. Lady Frances feels very real--not too smart and spunky but no shrinking violet either." —Rhys Bowen, New York Times bestselling author of the Royal Spyness and Molly Murphy mysteries