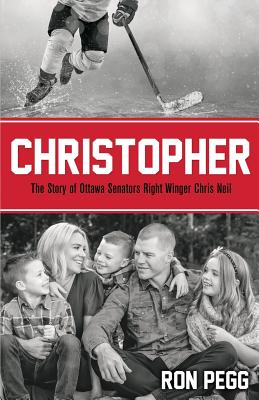 Chris Neil--or Christopher, as his mother, Bonnie, called him--grew up
with the ambition and desire to be an NHL hockey player. Through grit
and determination, he achieved his goal and left an indelible mark on
the Ottawa Senators franchise.

Christopher spent many hours as a youngster in Ron and Cathy Pegg's
home, providing the author with personal, first-hand knowledge of Neil
the hockey player and the man. That friendship continues to this day. In
this engaging biography, you'll meet the Neil family and the
personalities from the world of hockey that guided and formed Chris Neil
throughout his life--a life of athletics, community involvement, and
faith.

Christopher played over a thousand games in the NHL, all as a member
of the Ottawa Senators. He became one of just over fifty players in the
history of the league to play a thousand games with one team. The one
thousandth game was played in Los Angeles, with his wife, Cait, and all
the members of the Pegg family present.

Christopher is not the final word on Neil's career, as he
continues to serve the hockey community off the ice, but it does tell
the tale of a life well lived so far and will inspire hockey fans and
people of faith alike.