Apostles of Change: Latino Radical Politics, Church Occupations, and the Fight to Save the Barrio (Historia USA) (Hardcover) 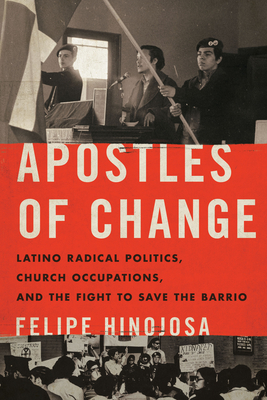 In the late 1960s, the American city found itself in steep decline. An urban crisis fueled by federal policy wreaked destruction and displacement on poor and working-class families. The urban drama included religious institutions, themselves undergoing fundamental change, that debated whether to stay in the city or move to the suburbs. Against the backdrop of the Black and Brown Power movements, which challenged economic inequality and white supremacy, young Latino radicals began occupying churches and disrupting services to compel church communities to join their protests against urban renewal, poverty, police brutality, and racism.

Apostles of Change tells the story of these occupations and establishes their context within the urban crisis; relates the tensions they created; and articulates the activists' bold, new vision for the church and the world. Through case studies from Chicago, Los Angeles, New York City, and Houston, Felipe Hinojosa reveals how Latino freedom movements frequently crossed boundaries between faith and politics and argues that understanding the history of these radical politics is essential to understanding the dynamic changes in Latino religious groups from the late 1960s to the early 1980s.

Felipe Hinojosa is an associate professor of history at Texas A&M University and the author of Latino Mennonites: Civil Rights, Faith, and Evangelical Culture. His work has appeared in Zócalo Public Square, Western Historical Quarterly, American Catholic Studies, and Mennonite Quarterly Review and in edited collections on Latinx studies.

Hinojosa does an excellent job of showing the importance of religious spaces to Latina/o justice movements in the late 1960s and early 1970s—a reality that has often been overlooked by historians…[Apostles of Change] is important for anyone interested in social movements, Latina/o history, and urban studies. The case studies also offer wisdom that community workers and activists might draw on for their work.
— The Christian Century

In the late 1960s and early ’70s, Latino activists occupied church buildings across the country as a way of taking back control of their communities and calling attention to local residents’ poverty, lack of educational opportunities and displacement amid revitalization plans that hiked up rents...Hinojosa gives this little remembered movement a new look.
— Religion News Service

Apostles of Change accomplishes Hinojosa’s goals of providing a religious history of 'Latina/o freedom movements,' and a social movement history of religion...Apostles of Change is a welcomed contribution to the literature on Latina/o political movements for its utilization of religion and urban history as frameworks of analysis. Scholars of social movements, urban history, and religion will find Hinojosa’s study imperative for understanding how grassroots activists challenged gentrification, discrimination, and power that connects the stories in the book to present obstacles facing Latina/os.
— Pacific Historical Review

Written in clear and engaging prose, Hinojosa’s Apostles of Change is an important work that teaches us that people can be agents in the creation of a brighter future for themselves and their community. This work is well researched and will only become more influential in years to come, particularly in the fields of Latino religious studies, Latino Civil Rights, as well as Mexican American history.
— Western Historical Quarterly

[Apostles of Change] highlights the organizing of community members, organizers, and activists as they transformed churches into staging grounds to challenge poverty, racism, urban renewal, and police brutality...In redefining the politics of faith, Hinojosa analyzes the histories of organizing from spaces of occupation to spaces of sanctuary within churches. Apostles of Change is a vital addition to the research on social movements within religious studies, Chicana/o/x studies, and Latina/o/x studies.
— CHOICE

In fifty years of incredible productivity in Chicano history, surprisingly few studies of religious history were written. One of the exciting new changes in this historiography is the increased study of religion, especially the link between religion and community activism. A new generation of historians is leading the way, and Felipe Hinojosa is a key member of this vanguard...In successfully resurrecting these histories, Hinojosa has written a significant addition to the growing historiography of Chicano/Latino religious history. Well-written and organized, it should be welcomed by historians of the Chicano/Latino experience and by those interested in American religions.
— Southwestern Historical Quarterly

Hinojosa takes seriously both the religiosity of seemingly secular activists and the politics of organized religion; at the nexus, he charts a new Latina/o religious history that took its cues directly from the streets...Hinojosa's occupiers offered radical visions for their community's liberation, breathed new life into their barrios, and remade their spiritual universes in both theological and practical terms. They were true apostles of change. Hinojosa's account of their exploits is a must-read for historians of social movements, religion, and working-class studies alike.
— Labor: Studies in Working-Class History of the Americas

A revolutionary contribution to Latinx church history in the United States...Apostles of Change is an expertly crafted text that integrates first-hand testimony, archive, and historical sources to present this lesser-known side of Latinx activism in American history.
— Perspectivas

Apostles of Change is expertly researched and written—a tribute to 'short but fertile' moments that bring religion to the forefront of Latinx social movements.
— Marginalia Review of Books