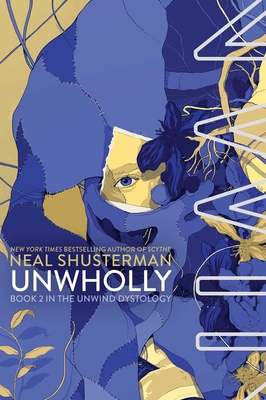 This is book number 2 in the Unwind Dystology series.

Connor, Lev, and Risa deal with the fallout of their rebellion in this riveting second book in the suspenseful, New York Times bestselling Unwind Dystology series by Neal Shusterman.

Thanks to Connor, Lev, and Risa—and their high-profile revolt at Happy Jack Harvest Camp—people can no longer turn a blind eye to unwinding. Ridding society of troublesome teens while simultaneously providing much-needed organs for transplant might be convenient, but its morality has finally been brought into question.

But unwinding is a big business, and there are powerful political and corporate interests that want to see it not only continue, but also expand to the unwinding of prisoners and the impoverished. And the minds behind unwinding have already begun pushing its boundaries.

Cam is the first “rewound,” a futuristic Frankenstein’s monster who does not technically exist and is made entirely out of unwinds’ body parts. He struggles with his identity and the question of whether he has a soul. And when the actions of a sadistic bounty hunter inextricably bind Cam’s fate with the those of Connor, Risa, and Lev, Cam comes to question humanity itself.

Neal Shusterman is the New York Times bestselling author of more than thirty award-winning books for children, teens, and adults, including the Unwind dystology, the Skinjacker trilogy, Downsiders, and Challenger Deep, which won the National Book Award. Scythe, the first book in his latest series, Arc of a Scythe, is a Michael L. Printz Honor Book. He also writes screenplays for motion pictures and television shows. Neal is the father of four, all of whom are talented writers and artists themselves. Visit Neal at StoryMan.com and Facebook.com/NealShusterman.

"Shusterman continues to develop and expertly twist plotlines begun in the first book, picking up the pace with short chapters and a present tense narrative while interspersing for verisimilitude actual recent news items about real organ harvesting and abandoned and “feral” teens. Perfectly poised to catch the Hunger Games wave and based on an even more plausible dystopian scenario...Fans will want to get their hands on this the second it’s released."
— Booklist

"Smart, intense, and thought provoking, this series will stick with readers."--VOYA, 5Q

“Shusterman elegantly balances the strikingly different perspectives of the three main protagonists effectively, and these dissimilar approaches to life highlight the ways in which the larger world grapples with unwinding. …The high quality of UnWholly will inspire readers to go back to see what was missed as well as stoke anticipation for the final book.”
— The Horn Book

Thematically rich and packed with action, commentary, and consequences, this is a strong pick for dystopia fans that will also appeal to reluctant readers.
— BCCB

"This sequel to Unwind is well worth the wait...the characters, action, and drama make it easy for readers to be drawn into the story and the weighty issues, such as what it means to be human and what it means to sacrifice for others. Several plot twists at the end not only make for a satisfying conclusion, but also expertly set the stage for the final installment of the trilogy."
— School Library Journal

"Readers will come to think deeply about the question of survival, and to what extremes one would go to for survival of themselves and loved ones. This book is a welcome addition to a science fiction collection, with threads of romance, adventure, and alternate universes which are closer to becoming reality. Recommended."
— Library Media Connection