The Ten-Cent Plague: The Great Comic-Book Scare and How It Changed America (MP3 CD) 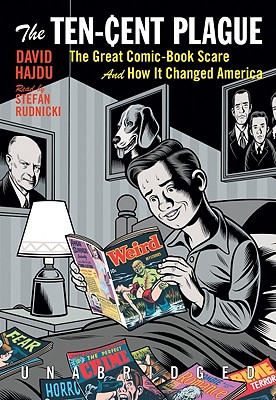 By David Hajdu, Stefan Rudnicki (Read by)
$29.95
Out of Stock - Not Available

In the years between World War II and the emergence of television as a mass medium, American popular culture as we know it was first created in the bold, pulpy pages of comic books. The Ten-Cent Plague explores this cultural emergence and its fierce backlash while challenging common notions of the divide between "high" and "low" art. David Hajdu reveals how comics, years before the rock-and-roll revolution, brought on a clash between postwar children and their prewar parents. Created by outsiders from the tenements, garish, shameless, and often shocking, comics became the targets of a raging generational culture divide. They were burned in public bonfires, outlawed in certain cities, and nearly destroyed by a series of televised Congressional hearings. Yet their creativity, irreverence, and suspicion of authority would have a lasting influence.