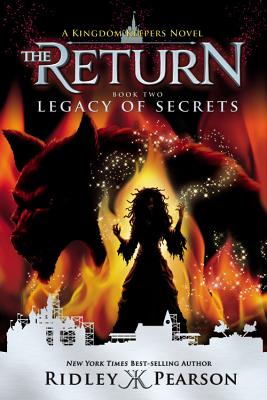 This is book number 2 in the Kingdom Keepers series.

Disneyland, Opening Day, 1955. When five present-day teenagers known as the Kingdom Keepers find themselves thrown into a past that would make anyone envious, things don’t exactly work out the way they’d hoped. Finn, Charlene, Maybeck, Willa, and Philby open a door into a place and a time when the legend of the Disney parks is just starting. They are there, in 1955, to retrieve Walt Disney’s infamous pen that once saved the parks as we know them. But like all things Disney, nothing is as it seems.The early days of the Tower of Terror, the origin of the Overtakers (Disney villains), and the real power of magic unfold in an unexpected series of events that propel both the Keepers and Disney itself into a darkness no one saw coming. Along the way, the Keepers visit Walt Disney’s hilltop home, Disneyland’s opening day and reception, and find themselves separated from friends sixty years away. The three Fairlies, young women in Disney’s School of Imagineering, girls with astonishing powers of their own, have unmasked a long-buried secret that threatens the lives of their friends as well as everything Walt Disney worked for.

Ridley Pearson is the award-winning author of the best-selling Kingdom Keepers series along with forty other novels for adults (suspense) and young readers (adventure) including cowriting Peter and the Starcatchers. Ridley spends a good deal of his time sneaking around the Disney parks and aboard the Disney Cruise Line ships all in the name of research.