The Tempest Tales: A Novel-in-Stories (Paperback) 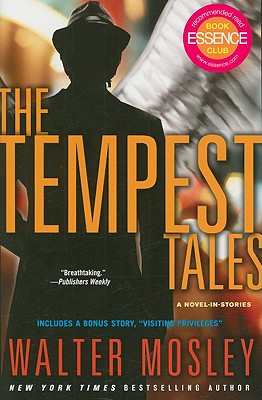 From the acclaimed bestselling author of the Easy Rawlins series, deemed “one of America’s best mystery writers” (The New York Times Book Review), comes a tale about a murdered man who does not want to go to heaven or hell—he’d rather have his old life in Harlem.

Tempest Landry is neither a good nor a bad man, but an average man trying to survive. Sure, he stole money from his mother’s church, but he used it to pay for his aunt’s groceries while she was recovering from pneumonia. And yes, Tiny Henderson went to jail because of Tempest’s white lie, but the brutal rapist and murderer deserved it. After a cop “accidentally” kills Tempest, Tempest is denied access to heaven for his sins. But he brazenly refuses St. Peter’s command to proceed to hell—he would just as soon settle for his old life in Harlem.

Temporarily stymied, St. Peter grants Tempest his wish—but in a different body and with a guardian angel following him around who is determined to convert him to righteousness. But the devil is also in the running for Tempest’s soul—and he wants it in a bad way. In this episodic and humorous homage to Langston Hughes’ prescient narrator Jess B. Simple, readers are lured into the never-ending debate on the nature of good and evil. The Tempest Tales explores the provoking questions: Is sin the same for people of different races? Is sin judged the same for the poor as it is for the rich? And ultimately, who really gets to decide?

Walter Mosley is the acclaimed author of forty-three books, including the internationally bestselling Easy Rawlins series. His best known Easy Rawlins novels include Devil in a Blue Dress, A Red Death, White Butterfly, Black Betty, and Little Yellow Dog. He is also the author of the collection of stories Always Outnumbered. Always Outgunned featuring Socrates Fortlow, which was the basis for an HBO feature film. A former president of the Mystery Writers of America, he was named a grand master by the organization in 2016. He has served on the board of directors of the National Book Foundation and is a recipient of the PEN American Center Lifetime Achievement Award. A native of Los Angeles, he now lives in New York City.