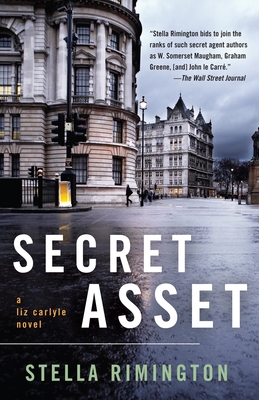 By Stella Rimington
$16.00
Out of Stock - Not Available

This is book number 2 in the Agent Liz Carlyle Series series.

Liz Carlyle, the quick, passionate intelligence officer of Britain's MI5, returns to defuse a terrorist plot in this high-stakes, high-tension tale of international espionage. When it appears a “secret asset”—a sleeper spy—has infiltrated British Intelligence, the Director of Counter-Terrorism assigns Liz Carlyle to dig up the mole. The spy, possibly a former IRA operative now working with British-born Al Qaeda sympathizers, has one thing on his (or her?) mind: total devastation. With a major attack looming, Liz must trust her instincts and move fast. But this assignment is deadly, and suddenly she feels like she has wandered into a wilderness of mirrors, where nothing is what is seems and no-one can be trusted.

Stella Rimington joined MI5 in 1965 and during her thirty-year career she worked in all the main fields of the Service's responsibilities--counter-subversion, counter-espionage, and counter-terrorism--and successively became Director of all three branches. Appointed Director-General of MI5 in 1992, she was the first woman to hold the post and the first Director-General whose name was publicly announced on appointment. Following her retirement from MI5 in 1996, she became a Non-Executive Director of Marks and Spencer and published her autobiography, Open Secret, in the UK.

“Stella Rimington bids to join the ranks of such secret agent-authors as W. Somerset Maugham, Graham Greene, [and] John le Carré.”—The Wall Street Journal“Welcome a new queen of the genre. . . . Stella Rimington, who was the first female director of MI-5, knows of what she writes.”—The Washington Times “Intelligent, vivid . . . [with] rich insider detail.” —The Plain Dealer “Brisk pacing and intelligent attention to detail make this thriller one of the better spy stories of recent times.” —Mystery Scene