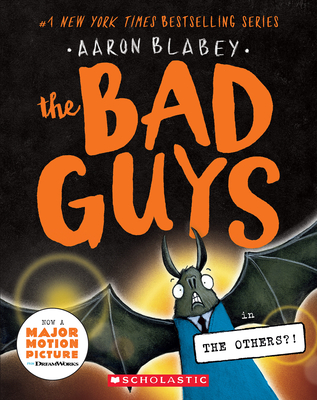 "I wish I'd had these books as a kid. Hilarious!" -- Dav Pilkey, creator of Captain Underpants and Dog Man

They may look like Bad Guys, but these wannabe heroes are doing good deeds... whether you like it or not in this New York Times bestselling illustrated series.

OK. A lot of the stuff we said on the back of the last book was NOT TRUE. We now admit that The Bad Guys is WEIRD. We also admit that it features ALL the weird stuff we said it didn’t. PLUS there’s now a whole bunch of even weirder stuff* involving an over-sharing bat, a really scary new character who lives in the woods, and a strangely confident little guy with a mullet. So, uh, don’t relax, maybe FREAK OUT a little and have your MIND BLOWN by the BAD GUYS!

*One of the other weird things in this book happens on pages 130-131. A total white-out—the most powerful blast this series has ever known. We told you it’s a weird book. And we hope you enjoy it!

AARON BLABEY has written many well-loved, bestselling books for children. He is the creator of three hugely successful series for children — the New York Times bestselling The Bad Guys (Les méchants), Pig the Pug (Carlos le carlin), and Thelma the Unicorn (Thelma la licorne). The Bad Guys movie released in 2022. It was produced by DreamWorks Animation with Aaron serving as an executive producer on the project.

Praise for The Bad Guys series:

* "This book instantly joins the classic ranks of Captain Underpants and The Stinky Cheese Man. We challenge anyone to read this and keep a straight face." -- Kirkus Reviews, starred review

* "Guaranteed to be a hit for chapter book readers looking for humor and action." -- School Library Journal, starred review