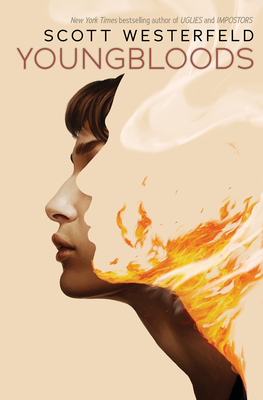 COME OUT OF HIDING

Frey has spent her life in a family of deceivers, a stand-in for her sister, manipulated at her father's command. Free from them at last, she is finding her own voice -- and using it to question everything her family stood for.

Tally was once the most famous rebel in the world. But for over a decade, she's kept to the shadows, allowing her myth to grow even as she receded. Now she sees that the revolution she led has not created a stable world. Freedom, she observes, has a way of destroying things.

As the world is propelled further into conflict and conspiracy, Frey and Tally join forces to put a check on the people in power, while still trying to understand their own power and where it belongs.

With Youngbloods, master storyteller Scott Westerfeld decisively brings back his most iconic character and merges his Impostors and Uglies series into a breathtaking tale of rivalry, rebellion, and repercussion.

Scott Westerfeld is the #1 New York Times bestselling author of the Uglies series, which has been translated into 35 languages; the Leviathan series; Afterworlds; Horizon; and many other books for young readers. He was born in Texas and alternates summers between Sydney, Australia, and New York City.

"Fans of the original quartet will be delighted to see how much the world of Tally Youngblood has grown and expanded... Even if readers aren't familiar with the original series, they'll still enjoy this well-placed novel from start to finish... Westerfeld's many, many fans will line up for this return to the world of his uberpopular Uglies." -- Booklist

"Although set in the world of Uglies, this work is accessible as an entry point. Impressive, immaculately plotted sci fi chock full of twists." -- Kirkus Reviews

"Themes such as environmental conservation and individual freedom deepen the story right up to its explosive finale, which will leave readers looking forward to the next installment." -- Publishers Weekly