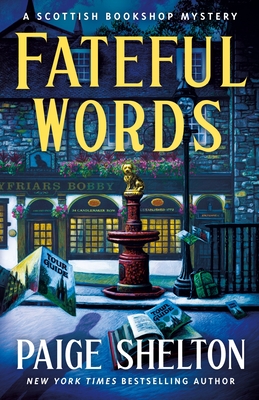 This is book number 8 in the A Scottish Bookshop Mystery series.

When Edwin, Delaney’s boss at the Cracked Spine bookstore, leaves town on secret business, Delaney is called upon to guide his yearly literary tour around Edinburgh. But on the first night of the tour, at the inn where the tour group is staying, the inn manager falls—or is pushed—off the roof of the inn, and killed. Then, one of the tour members disappears, leaving a trail of puzzles in her wake.

In a race against the clock, Delaney sets out on the expedition of her life, following clues around Edinburgh to get to the bottom of this mystery. Exploring sights from Greyfriars Bobby to the Royal Mile to the Sir Walter Scott Monument, she'll have to put the pieces together quickly, or the bookstore's survival could be on the line...as well as her own.

"Engrossing....Cozy fans will be enchanted." —Publishers Weekly on The Burning Pages

"Filled with literary references that will tickle bibliophiles." —Kirkus Reviews on Deadly Editions