Arlo Finch in the Valley of Fire (Paperback) 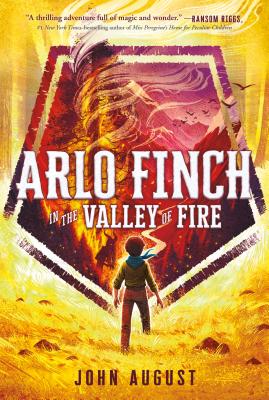 This is book number 1 in the Arlo Finch series.

"I'm sorry, but it's a *magical cub scout camp,* where you learn magical knots and wizarding adventure skills. I wish I could be an 11-year-old reading it at summer camp. Please buy this for your children. Let me live vicariously through their joy."

“Lumberjanes meets Stranger Things in the contemporary Colorado mountains. Arlo and his family have lived a transient life since his hacker father fled for China. As a last resort, they move in with weird Uncle Wade in Mom's hometown where the supernatural is very much a part of everyday life. Invited to join the Rangers, Arlo soon discovers his own surprising connection to Pine Mountain and its mysterious, magical woods. Page-turning, funny, fantastical, and engaging, this one is sure to fly off the shelves.”
— Summer Laurie, Books Inc., San Francisco, CA

Arlo Finch in the Valley of Fire is the first book in a spellbinding middle grade fantasy adventure series by screenwriter John August.

Some trails lead to magic. Some lead to danger.

As Arlo looked around, the walls of his room began to vanish, revealing a moonlit forest. Only his bed remained, and the frame of his window, through which he saw the girl. The world on her side of the glass was sparkling with silver and gold, like a palace made of autumn leaves.
She looked off to her right. Someone was coming. Her words came in an urgent whisper: "If I can see you, they can see you . . . Be careful, Arlo Finch.”

Arlo Finch is a newcomer to Pine Mountain, Colorado, a tiny town of mystery and magic, but he's already attracted the attention of dark and ancient forces. At first he thinks these increasingly strange and frightening occurrences are just part of being in Rangers, the mountain scouting troop where he learns how to harness the wild magic seeping in from the mysterious Long Woods.

But soon Arlo finds himself at the center of a dangerous adventure, where he faces obstacles that test the foundations of the Ranger's Vow: Loyalty, Bravery, Kindness, and Truth.

Praise for Arlo Finch in the Valley of Fire:

“Much like other popular series such as 'Percy Jackson,' [this is] an exciting fantasy novel grounded in reality with a strong emphasis on friendships and great characters. This new series will appeal to fans of mystery and adventure as well as reluctant readers.” —School Library Journal

Born and raised in Boulder, Colorado, John August earned a degree in journalism from Drake University and an MFA in film from USC. As a screenwriter, his credits include Big Fish, Charlie’s Angels, Charlie and the Chocolate Factory, Corpse Bride and Frankenweenie. His books include Arlo Finch in the Valley of Fire.

In addition to his film career, he hosts a popular weekly podcast, Scriptnotes, with Craig Mazin. He also created the Writer Emergency Pack, an educational storytelling tool that was distributed to over 2,000 classrooms in partnership with non-profit literacy groups like 826LA and NaNoWriMo. John and his family live in Los Angeles.

Praise for Arlo Finch in the Valley of Fire:

“A masterful mix of mystery and adventure, set in a supernatural scouting troop. Reading this book made me wish I hadn't dropped out of Cub Scouts.” —Geoff Rodkey, New York Times–bestselling author of the Tapper Twins series

“Accomplished screenwriter August artfully thrusts readers into a whole new world, right alongside Arlo . . . This is just the first volume in a new series, so readers won’t have to wait long to plunge back into the mysterious Long Woods.” —Booklist

“Much like other popular series such as 'Percy Jackson,' [this is] an exciting fantasy novel grounded in reality with a strong emphasis on friendships and great characters. This new series will appeal to fans of mystery and adventure as well as reluctant readers.” —School Library Journal

“The mysteries—from what makes Arlo a target to why a girl who vanished years ago has reappeared to him and only him—become increasingly more compelling as more pieces are revealed . . . Readers will find Arlo relatable, especially if they’ve ever struggled to fit in themselves.” —The Bulletin